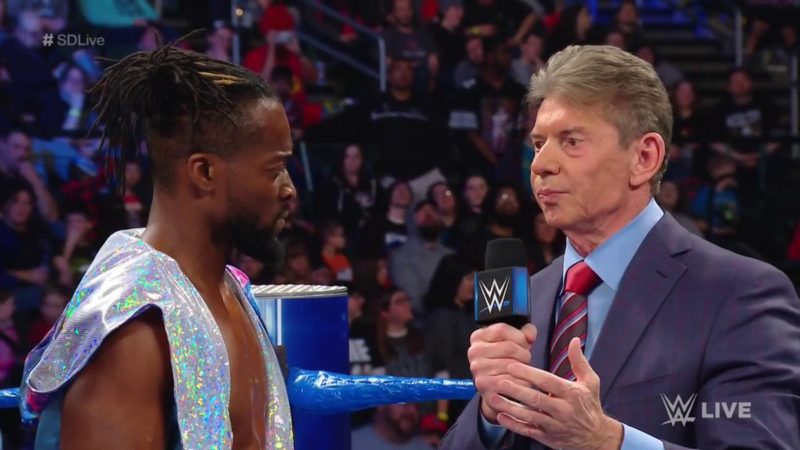 Former WWE Champion Kofi Kingston recently sat down with talkSPORT‘s Alex McCarthy to chat about his title run and his relationship with Vince McMahon. From the emotional win at WrestleMania to his heartbreaking loss on the first SmackDown on FOX, Kingston relived the entire journey.

When it came to Vince, Kingston was grateful that he and the New Day were given a chance to shine as heels early on in their run.

Vince has been on the ride with us and he was actually one of the only people to support the New Day when we were first coming up. Granted, we didn’t want to be three preachers, but he was the one that actually gave us a chance to go out there and be a unit.

Just going through the ups and downs and him thinking we were going to be this widely accepted thing and we’re going to go out there and preach positivity and then all of a sudden, people turn and the jaded universe didn’t like being positive?! You know what I’m saying? But we talked to him and he was like, ‘Yeah, I thought this was going to be positive and you guys were right, so let’s see what we can do.’

Getting further into their relationship, Kofi Kingston was asked what the worst thing McMahon ever said to him was. Kingston laughed and took us all the way back to his days in ECW. Back to when his “Trouble in Paradise” vignettes began to air.

Terrible vignettes! Awful. It makes me cringe to watch them to this day. At the time, I’d go to shows and I’d be able to listen to them on the headset while it was going on. And as my vignette comes on, I can hear Vince on the headset and he goes, ‘Oh, these are barely, barely passable.’

Kingston went on to say that he assumed that Vince knew he was listening and was probably just trying to rile him up. However, after about half a year with the WWE, he understood that there’s too much going on for Vince to really know who’s listening on the headset throughout the show. Thankfully, he didn’t let Vince’s comments get to him.