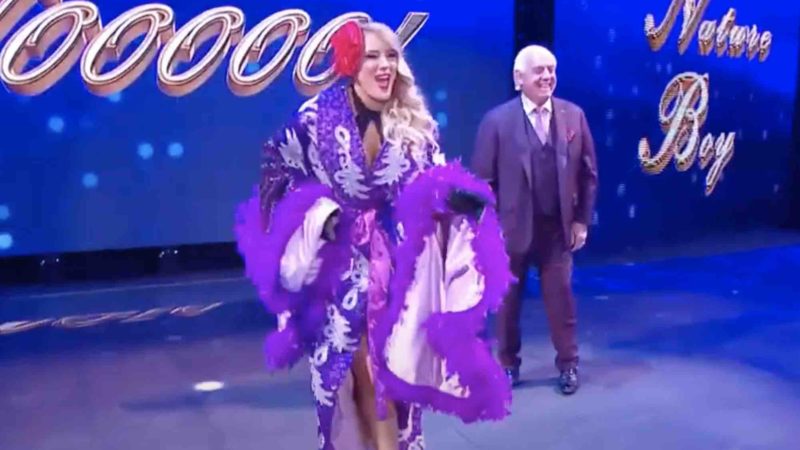 Lacey Evans was ‘hurt’ by having to leave WWE Raw. The ‘Dirtiest Player in the Game’ and Sixteen time world champion, Ric Flair was recently interviewed on The Wrestling Inc. Daily and by the Managing Editor of Wrestling Inc. Nick Hausman. The newly seventy-two year old Flair sat down with Hausman to discuss a wide variety of topics. Here, Flair discusses how Lacey Evans was hurt in the short-term, knowing the storyline between her and the Flairs was going to be dropped due to her legitimate pregnancy. Flair told the outlet the following. Lacey Evans was ‘upset’ with aspects of how WWE handled her affair storyline with Ric Flair.

“You’re talking to the wrong guy. You need to get that interview with somebody in the office,” Ric joked. “I have no idea. I just got to TV, and they said it to me. I was as much in shock as you were. I came to Legends Reunion to be a legend.

Flair continued: “Next thing I know I’m managing Lacey, no explanation, and she’s such a nice girl. She wanted it so bad, but life is life, and I told her I wouldn’t trade out your pregnancy for wrestling for one second. She was hurt a couple days, but she’s gone home and realized that, ‘hey, I’m having a baby.’ Ultimately in life, is there anything bigger than family?”  Lacey Evans just revealed a ‘baby bump’ photo.