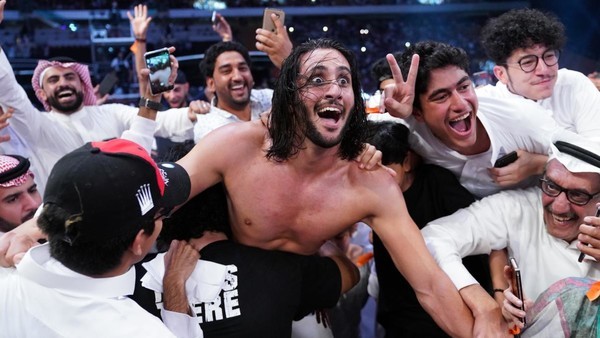 WWE’s first-ever Saudi Arabian Superstar Mansoor has impressed a lot of people in the business. The 24-year old Superstar has showcased his mic skills (as seen on NXT TakeOver: Portland pre-show) as well as his abilities as an in-ring performer.

At last year’s WWE Super ShowDown, Mansoor defeated Cesaro in a singles match. The up and coming Superstars surprised a lot of people with his work in the ring and the fact that he could stand his own against one of the very best in the world.

Ahead of next week’s WWE Super ShowDown, the NXT Superstar talked to Arab News about several things related to his WWE career so far.

Mansoor reflected on his match against Cesaro from last year and said that he believes he surprised a lot of people with what he could do. He said that the match itself was very exciting and made a lot of people happy, including himself.

To wrestle someone like Cesaro, who is an incredible athlete, was amazing. I think that a lot of people didn’t really know how that was going to go because I hadn’t really been tested before.

He went on to say that he can no longer be dependent on the “surprise package” factor. He said that now his upcoming opponents will know what to expect from him, unlike the Cesaro match.

He also revealed that although he will be performing at next week’s Super ShowDown, he doesn’t know who he will face.

That’s very true. I was very much depending on that, and Cesaro even said ‘I don’t know who this kid is.’ There are no real videos of me to watch, to see what I can do, compared to the years that I can watch of Cesaro.

I know I will be competing at Super Showdown, but I haven’t found out who my opponent will be yet. But I get the feeling that now it’s going to be a bit more of an even playing field, where both of us are going to be able to feel each other out and see what we’re going into.

The NXT Superstar went on to say that he has a few more surprises that he hasn’t shown us yet. He also said that in the Cesaro match he was just another NXT trainee, but now his opponents will know that he can be dangerous.

I think whoever I share the ring with is going to be a lot more prepared, more wary, more aware. They’ll know that I have the home town advantage. But I haven’t really done all the things that I can do, so there are still some more surprises, and they will know that.

As far as Cesaro was concerned I was just some trainee from NXT who had barely ever been in the ring before. But now they’ll know that this kid will be dangerous, so I’m looking forward to the challenge.