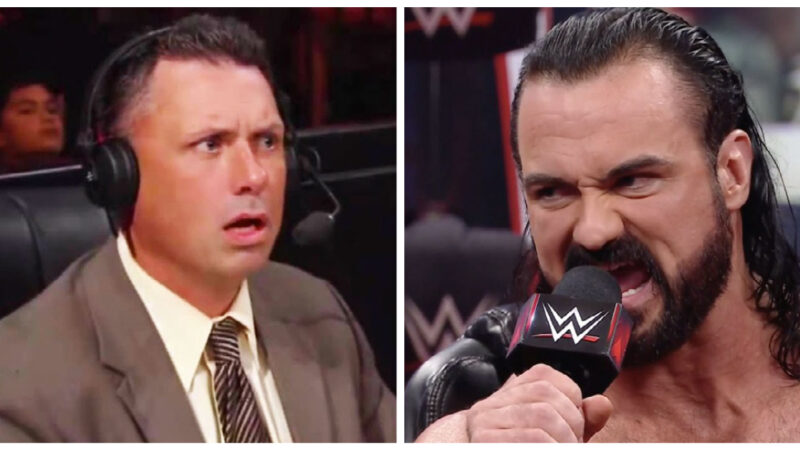 Michael Cole has been on Smackdown for some time but has been known to call the action on WWE Monday Night Raw as well. Although he hasn’t been on WWE Raw in a couple of years now, he did make an appearance of sorts during tonight’s edition as piped in audio can be heard during Drew McIntyre’s entrance which included Cole yelling out ‘sixteen-time champion’ from John Cena’s entrance as podcast host Mr. Warren Hayes pointed out on Twitter. Michael Cole recently shouted out this fired WWE name on Smackdown

“Here’s the audio of the crowd sweetening of Drew’s entrance which includes Michael Cole bellowing “16-time champion!” and some cinematic music.”

In other news regarding Michael Cole, while the veteran announcer has been in WWE for a long time there have been instances of the WWE Universe possibly underrated the broadcaster, especially when it comes to fellow wrestling commentators such as Jim ‘JR’ Ross and Jerry ‘The King’ Lawler.

In a recent edition of his ‘Hall of Fame’ podcast, WWE Hall of Famer and former five-time WCW Champion Booker T discussed why Michael Cole is one of the best commentators of recent memory and why the fans don’t see that. Credit to WrestlingNews.co for the below.

“The thing is, people don’t understand. That’s what it is. People rip Michael Cole, but they really don’t understand the details of that business, what that job really entails, how hard it really, truly is, and how good Michael Cole really, truly is. You just can’t think you can talk and do that job. It doesn’t work that way. You have to be working three different jobs at one time. You have to have so much in your head. I’ll tell you, I don’t know anyone that does it better. People can say, ‘He’s kissing up to the company. Whatever.’ I don’t kiss up. It’s just not something that I do. Michael Cole is damn good at what he does, and I challenge anybody to step into that spot and think they can do it better. I’m just saying this as seriously as I possibly can.”

Here's the audio of the crowd sweetening of Drew's entrance which includes Michael Cole bellowing "16-time champion!" and some cinematic music.#WWERAW pic.twitter.com/GFsYM1CNPI