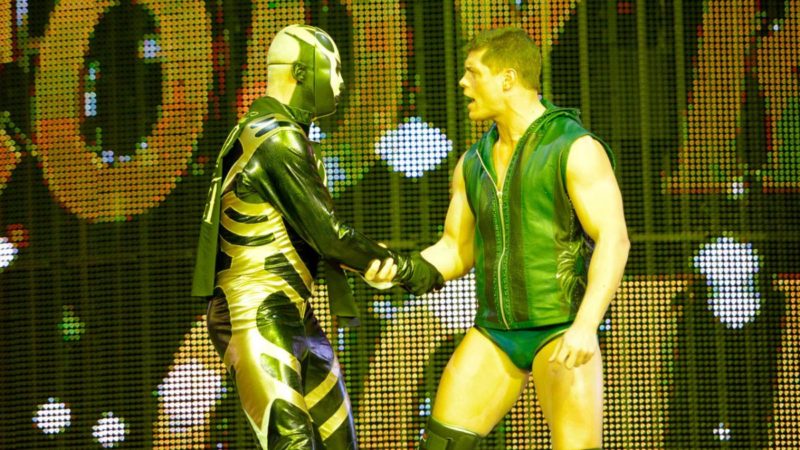 As reported earlier, WWE is bringing back Starrcade for a special SmackDown Live Event on Saturday, November 25th. Cody Rhodes and Brandi Rhodes responded to the announcement. Cody said that his brother, Goldust, should be a part of the event because their father Dusty Rhodes created the event.

If you're afraid an event won't sell cuz' the holiday and want one of my Dad's events…at least book Goldy..

Brandi Rhodes criticized WWE for not acknowledging the fact that Dusty Rhodes created Starrcade and waiting till after he passed away to bring back the event.

Starrcade was created and delivered by Dusty Rhodes. WWE didn't want to do it while he was here. Now they want to do it and not give credit? pic.twitter.com/5ZLsoptjHE

Since Cody’s tweet, Michael Hayes has responded and offered him an opportunity to team with his brother Goldust at Starrcade. It is unlikely that Cody will be returning to a WWE ring any time soon, however this would be the perfect venue for him to do so for the Rhodes brothers to team up one more time.

So Cody, UR right we should have Goldy on the show, by the way, what R U doing that night??? Wanna team with UR Brother?

WWE released a statement earlier today about Starrcade and the current matches advertised for the show on November 25th in Greensboro, North Carolina.

Starrcade is back, and for the first time in 30 years, it’s coming home.

On Saturday, Nov. 25, during Thanksgiving weekend, Starrcade returns when the Superstars of SmackDown LIVE descend on Greensboro, N.C., for a historic event at the Greensboro Coliseum.

The premier event of the National Wrestling Alliance and, later, WCW, Starrcade got its start in Greensboro on Thanksgiving 1983 with a star-studded lineup that saw Ric Flair defeat Harley Race to win his second of 16 World Championships. Starrcade remained in Greensboro through 1986 and was the stage on which legendary performers like Dusty Rhodes, The Four Horsemen, Magnum TA, The Rock ‘n’ Roll Express and many more etched their names into sports-entertainment history.

As the calendar turned to the 1990s, a new generation of competitors emerged to take the Starrcade spotlight, like Sting, Vader and the nWo. The last edition of Starrcade under the WCW banner took place in December 2000.

Now, fans in Greensboro will get the opportunity to be a part of history, as Starrcade returns with an absolutely stacked card featuring two Steel Cage Matches. Matches announced* for the return of Starrcade include:

The Hardy Boyz are also confirmed to appear at Starrcade in their home state of North Carolina, as are WWE Hall of Famers and Starrcade legends Ricky “The Dragon” Steamboat and The Rock ‘n’ Roll Express!

Tickets for Starrcade will be available starting Friday, Sept. 29, at 10 a.m. ET at Ticketmaster. Don’t miss your chance to be a part of history as Starrcade returns!