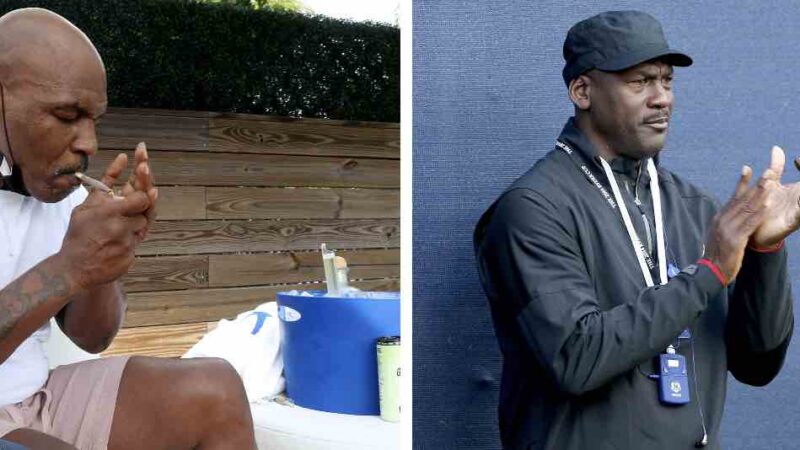 Mike Tyson and Michael Jordan are two of the greatest stars in their respective fields. Fans might have never imagined what would happen if they squared off. It seems if almost squared off during a birthday dinner. As it turns out, Mike Tyson tried to challenge Michael Jordan to a fight over his relationship with Tyson’s then-wife, Robin Givens.


Mike Tyson and Michael Jordan almost had a scuffle

The incident took place in 1988 at a birthday dinner arranged for NFL star Richard Dent. Mike Tyson had already cemented his name as one of the greatest heavyweight boxers of all time. He had become the youngest boxer ever to unify the WBA, WBC, and IBF titles.

As a result, he was officially the undisputed heavyweight champion of the world, still undefeated inside the ring. On the other hand, Michael Jordan wouldn’t win his first ring till 1991. However, he had established himself as a superstar in the NBA after the Chicago Bulls drafted him in 1984.

Mike Tyson had started dating Hollywood actress Robin Givens in 1987. The Boomerang (1992) star married Tyson in 1988. However, the marriage took an ugly turn within months.

In fact, Givens accused Tyson of spousal abuse. The high-profile celebrity marriage made headlines in the news regularly. Meanwhile, Jordan had a brief affair with Givens at that time. As it turns out, Tyson didn’t like the fact that Jordan had an affair with his wife. Therefore, the legendary boxer confronted the Bulls legend at a party.

“Mike stares across the table at Michael Jordan. He says, ‘Hey man, you think I’m stupid? I know you f***** with my b****,‘” reported Rory Hollway, one of Tyson’s managers present at the party.

“Jordan looks like he just seen a ghost,” he added. “Mike telling everyone he’s going to bust Jordan’s a**. Jordan’s dressed sharp as always and he can’t get out of there fast enough.”

Incidentally, Tyson had been drinking that night. According to Hollway, alcohol brought the worst out of Mike and things almost went out of hand.