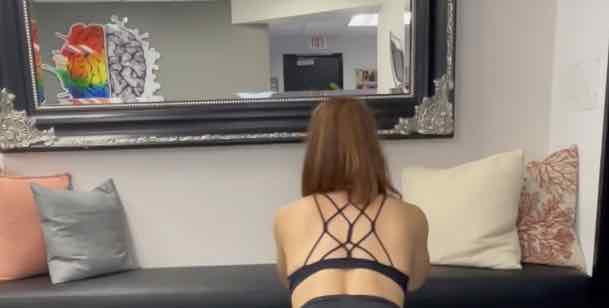 In a new Instagram video posted up by Miesha Tate, she is looking great while she is getting a quick stretching workout in some yoga.

On Instagram, Miesha Tate showed us a bit of her routine before she gets into a heavy workout. Miesha has been in the news lately due to a Tweet that is resurfacing from years ago via Conor McGregor.

In 2013, the Irishman had to swallow his own words was when he passed on some remakes on female UFC fighters, Ronda Rousey and Miesha Tate. McGregor replied to a tweet where a fan has asked him: “One night before the world ends…Ronda or Miesha?”

McGregor replied saying: “One riidin d*ck, one lickin ma toessssss.” However, the response where the lyrics from a song called ‘Let’s Get High’, nevertheless McGregor did realize that he shouldn’t have said that.

He then took to his social media and deleted the response. Moreover, he wrote an apology to both the female fighters. McGregor said: “I would like to personally apologize to both Ronda Rousey and Miesha Tate. This morning I quoted a song on Twitter in an attempt to make a joke, which I now see was totally unacceptable and offensive. I have infinite respect for Miesha and Ronda as individuals and as athletes.”

The Notorious further added: “I have always been a big fan of women’s MMA and the incredibly talented athletes that compete in the sport. I regret making this offensive comment and I sincerely apologize to anyone whom I offended, but especially Ronda and Miesha.”

The apology sat well with the bantamweight, Miesha Tate, and in response, she took to Twitter to reply to McGregor. She said: “It’s all good, appreciate the apology, but I knew you were just joking!”

Ronda, at the time, did not have much to say about the Tweet.