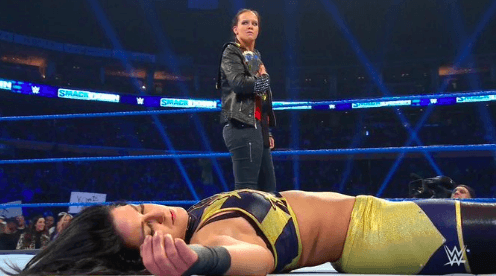 As seen on this week’s episode of SmackDown, Bayley defended her SmackDown Women’s Title against Nikki Cross. After some interference by Sasha Banks, the Champion managed to successfully defend her title against Cross by defeating her.

However, once the match was over, NXT Women’s Champion Shayna Baszler appeared out of nowhere and took out Banks on her way to the ring. She then got in the ring and attacked Bayley and Cross both.

To end this segment, Baszler hit a devastating maneuver on Bayley and left her lying in the ring as she walked out of the ring.

This could be a set-up for a potential Survivor Series match given that the NXT Superstars will also be a part of this event alongside the RAW And SmackDown roster.