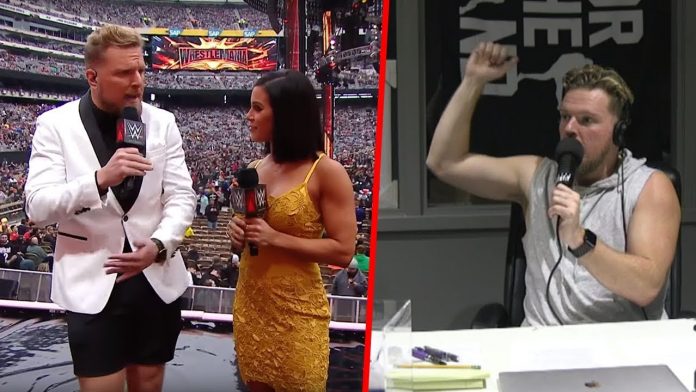 Former NFL player, current radio/internet host, and now new WWE personality, Pat McAfee donned his shorts gimmick this past Sunday at WrestleMania 35, causing his boss Michael Cole to lose it and as a result, almost making McAfee quit on the spot.

He had the following to say on his podcast about the incident yesterday:

“I was told, specifically, ‘no jorts.’

So, I said, ‘you know what, I’m not gonna wear jorts. Not at WrestleMania. WrestleMania deserves a little bit more.’ So we took tuxedo pants, and what did we do? Made ‘em tuxedo – shorts.

The show’s supposed to go live at 5 o’clock… We had like five rehearsals scheduled, none of them happened until about 4:15, 45 minutes before then. I had been sitting in gorilla for 2-3 hours, at this point, just waiting for rehearsal to happen, less than 10 feet away from Vince McMahon the entire time, didn’t say a single word – he looked busy. So I didn’t say anything, I was just sitting over there, we finally do the rehearsal. I come back in for the rehearsal and it’s Michael Cole is on the phone, panicking, with the entire McMahon family in the gorilla, I believe there’s a couple other Superstars in there, celebrities are in there, and I just start getting yelled at by Michael Cole in front of all these people. You know whenever you’re a child, you’re at the grocery store and you knock over everything and your mom like yells at you in front of everybody? That happened to me just a couple days ago. By Michael Cole. For wearing shorts.

He said, ‘I told you no shorts.’ I said, ‘You told me no jorts.’ He said, ‘You look unprofessional, you look sloppy.’ He was yelling at me in front of all these people that I’ve looked up to for so long. So I looked at Michael Cole and I said, ‘They’re tuxedo shorts, man.’ And he said, ‘I can’t – you look terrible!’ He was like yelling, real – this wasn’t like a rib or a gimmick, you could tell there was actual panic. I’d been wearing these, this outfit for 10 hours at this point. So now we’re 45 minutes before the show. I feel like I could have been told earlier and also potentially not getting yelled at in front of everybody else that’s there.

So I told Cole ‘okay,’ I gave him like an ‘oh, okay.’ and then walked out of gorilla, and then I walked to where Watch Along was happening, and I grabbed my bag, and I told the digital guy, I said, ‘hey, you tell Michael Cole… to go f*** himself, I am leaving,’ right? I am not getting punked and yelled at like a child in front of everybody like that. You guys think I’m some schlub… this is a second job to me. I’m very lucky to be here, very excited to be here, but I’m not gonna be yelled at like I’m a f***ing child in front of people. So, the digital guy who had set up a five hour Watch Along show was like, ‘Is there any way we can maybe not have you leave right now?’

I’m like, ‘No. I don’t give a f*** about any of this. I’m not gonna get punked like a little child in front of a bunch of people.’ He’s like, ‘I’ll go talk to Vince McMahon.’ This all happened in front of Vince McMahon, so I don’t even know if he even realized it was happening because he has 4000 things happening, he’s gotta set up the whole show.”

He also spoke about deliberating in a quiet room at Metlife Stadium whether to leave or not following the dressing down from his boss:

“Digital guy and Michael Cole come back. Vince McMahon told them, and this is what I was told, they showed him a picture of LeBron James wearing a short suit and Vince McMahon said, ‘yep, I’m hip, I’ve seen it,’ and then I guess Vince said he loved it.

Michael Cole comes back, gives me one of the realest apologies I’ve ever gotten in my entire life. He tells me, ‘it’s been a long week, we’ve got a lot going on, I saw you, I thought this was gonna ruin it for you, to be honest.’ … He wants me to do a lot with the WWE, he thought I was gonna ruin it for Vince seeing me in shorts and being like, ‘who is this?’ But instead, complete opposite. He [Cole] did stress to me how important it was that this was gonna be the first time Vince McMahon is gonna see you on TV, so it was a high stressful situation and I do think that he thought I might have ruined it for myself. So I took the apology. First time in my life I’ve ever looked at a guy in right in his eye while he apologized to me and been like, ‘I mean, you definitely just punked me in front of a lot of people, but I can understand where you’re coming from.’

And I thanked him for it, actually, for the apology, and at this point we’re 14 minutes away from showtime. And he’s like, ‘okay, we’ve got to get you f***ing up to gorilla because you’ve gotta get mic-ed up, we’re about to go live in, what, 14 minutes.’ That’s a 10 minute walk from where we were to get to gorilla, so whenever you saw me go on for the first Kickoff show hit? I had just gotten my thingees on probably 30 seconds before that.”

So this is why Michael Cole was losing his voice toward the end of WrestleMania!? Fascinating insight into the circus that is WWE.