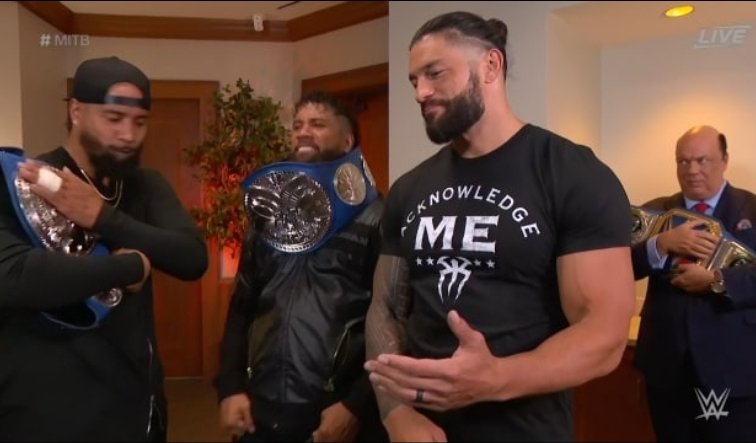 Roman Reigns indicated in a new gym video that his tag match with The Usos at WrestleMania Backlash was the last six man tag match The Bloodline will compete in.

“We already know that you’re going to miss us, because we’re the greatest to ever do it.”

He also teased staying with WWE, but also indicated he might go away.

A post shared by Joe Anoai aka “Roman Reigns” (@romanreigns)

The former WWE United States Champion Cesaro had quietly parted ways with WWE. ‘The Swiss Superman’ had his WWE contract surprisingly expired in February after negotiations with the company stalled. Reports at the time indicated that the two sides were unable to come to terms on a new deal. While he’s been relatively quiet since then, it appears that he is ready for a new move.

In addition to recently changing his Twitter handle to “ClaudioCSRO” and adding his former name Claudio Castagnoli to his bio, he also tweeted a photo of himself with a very interesting attached quote:

The tweet certainly sounds familiar as it is a very similar to the line Dr. Dre used at the beginning of his track “Forgot About Dre” with Eminem back in 1999. Later in the song is a line that could be a potential foreshadowing of Cesaro’s return to Claudio Castagnoli:

“Y’all are gonna keep f***ing around with me and turn me back to the old me.”

There is a possibility that the Swiss star could be heading to AEW soon. Fans have been speculating about him jumping the ship to Tony Khan’s company. While it has not already happened but the switch could come upon soon. The current Ring of Honor World Television Champion Samoa Joe is slated to compete against a “Joker” opponent in the first round of the Owen Hart Foundation Cup Tournament. AEW’s use of the “Joker” is generally reserved for surprise debuts and returns. We will have to see if Cesaro is revealed as the “Joker”