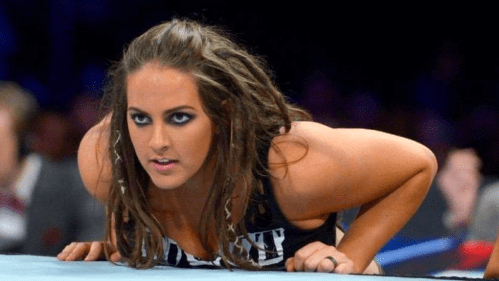 The Riott Squad has been dissolved ever since Liv Morgan was individually drafted to SmackDown LIVE as a part of this year’s Superstar Shake-up. Ruby Riott is out with an injury and in the meantime, Sarah Logan is missing from TV altogether.

However, that might change for Logan because it seems like creative finally has something in stores for her. Logan came out during the commercial break on this week’s Monday Night RAW and cut a promo on the ramp.

Fans in attendance took some pictures of this off-screen promo and Ryan Satin of Pro Wrestling Sheet went on to reveal some interesting details about Logan’s promo.

And Sarah Logan is back making some Viking Raider references pic.twitter.com/NaEvFKkkLm

Satin said that in her promo, Logan said that she is a “Viking” and that she plans to “raid” the entire women’s division. For those unaware, one half of the Viking Raiders, Rowe, is married to Logan and the two even had a Viking-themed wedding.

It will be interesting to see if Logan actually becomes associated with the Viking Raiders in the near future.