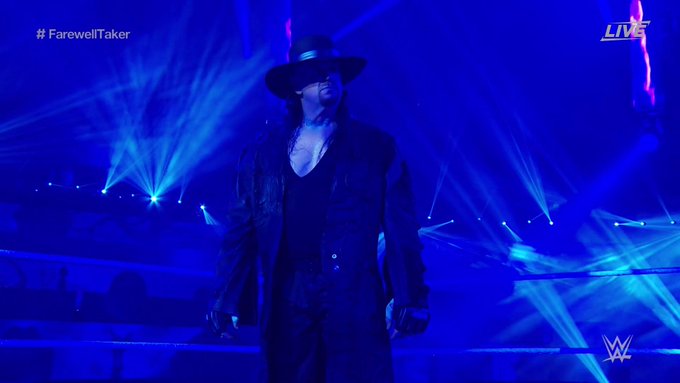 The Undertaker is one of the greatest stars to have graced the squared circle and he has entertained the fans for three decades. WWE recently made the announcement that he will be inducted into the prestigious WWE Hall of Fame in the WrestleMania 38 weekend. WWE Elimination Chamber was recently held in Jeddah, Saudi Arabia and it turns out that ‘The Phenom’ was planned to make his presence felt at the event.

Mike Johnson of PWInsider recently reported that there were plans for ‘The Phenom’ to make a cameo appearance at Elimination Chamber ahead of the Hall of Fame Induction. But, that plan did not materialize:

“While he did not make the trip, at one point, there were plans for newly minted WWE Hall of Famer Undertaker to make a non-wrestling appearance to celebrate his impending induction on the WWE Elimination Chamber PPV but the plans were dropped.  We are told the idea was pretty much a cameo appearance as opposed to any sort of angle.”

Mike Johnson also noted that WWE Hall of Famer Kurt Angle was also planning to appear at the show. However, the WWE creative nixed the plans for his return as well. Kurt Angle’s last match in a WWE ring happened at WWE WrestleMania 35 where he would succumb to the rising star known as Baron Corbin. He said:

“There were also plans at one point for WWE Hall of Famer Kurt Angle to appear on this show before the planned creative for his return was dropped.  There is no word what the role would have been but it’s not believed to have been Angle wrestling.  Angle’s return would have been for 3-4 weeks culminating with this show.  We are told the ideas for Angle were dropped weeks ago.”