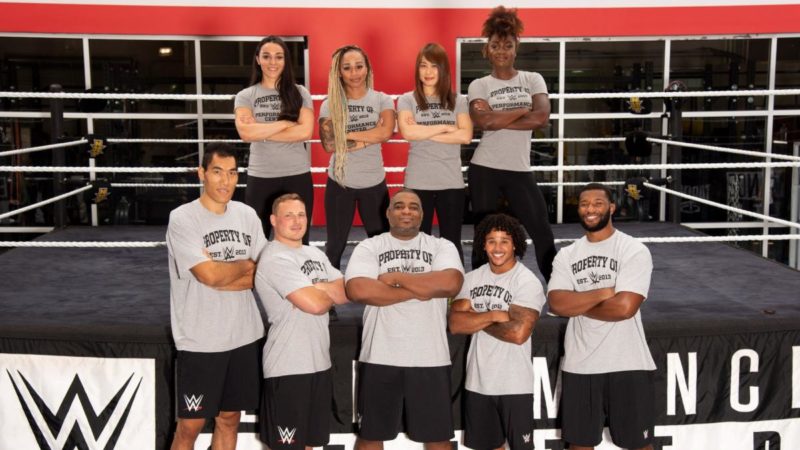 It’s been noted before that wrestlers like Io Shirai, Deonna Purrazzo, and Keith Lee have joined the WWE Performance Center. Keith Lee was spotted at the most recent NXT TakeOver: Chicago, while Io Shirai was publicly announced as a new NXT competitor a few weeks ago while the WWE was touring in Japan.

However, the WWE has made an official announcement regarding their next class of recruits at the Performance Center. Below is their statement, including short bios about each competitor.

A week after celebrating its five-year anniversary, the WWE Performance Center in Orlando, Fla., has welcomed its newest class of Superstar recruits.

Ranging from one of the most lauded super-heavyweights of the independent wrestling scene to NCAA champions in basketball, gymnastics and grappling, the new class is one of the most athletically diverse groups to ever join WWE’s training center.

Get a full rundown of the new recruits below.

Leading the way is Keith Lee, a 6-foot-2, 320-pound former champion from the independent wrestling scene. A native of Texas, Lee made waves last month when he appeared in the crowd during Aleister Black and Lars Sullivan’s NXT Title Match at TakeOver: Chicago II. Going by the nickname of “Limitless” on the indies, Lee has captured many titles during his 13-year career, including the World Wrestling Network Championship and the Pro Wrestling Guerrilla Championship.

A former member of the Texas A&M football squad, Lee was courted by sports agents to pursue a career on the gridiron before he decided to follow his dream of becoming a WWE Superstar. As renowned for his remarkable agility as he is his incredible power, Lee has been known to destroy preconceptions about what it means to be a super-heavyweight. He has also clashed with the likes of NXT Superstars Kassius Ohno and Dominik Dijakovic in the past, including Lee successfully defending the WWN Title against Ohno at WrestleMania Axxess in New Orleans in April.

Also reporting to the WWE PC is Japan’s Io Shirai, whose signing with WWE was originally announced last month at a Live Event in Tokyo. Shirai is a multi-time champion of the Tokyo-based World Wonder Ring Stardom, the same organization where NXT’s Kairi Sane first made her mark. Also known as “The Genius of the Sky,” Shirai is hailed for her dynamic in-ring style, which combines jaw-dropping aerial moves, technical wrestling and fierce strikes and suplexes.

Shirai was named Japan’s top female grappler in 2015, 2016 and 2017 by national sports newspaper Tokyo Sports, and Pro Wrestling Illustrated ranked her as the sixth-best women’s wrestler in the world in 2017. Last week, Shirai was also confirmed as one of the first competitors in this year’s WWE Mae Young Classic tournament.

Twenty-four-year-old “Virtuosa” Deonna Purrazzo, from Jefferson, N.J., also joins the WWE PC. A former national competitor in cheerleading, Purrazzo was inspired to become a sports-entertainer after watching WWE Hall of Famers Trish Stratus and Lita. She began training for the ring in 2012 and made her wrestling debut in December 2013. In short order, Purrazzo ascended the ranks of the independent scene, competing for organizations like Ring of Honor, Beyond Wrestling and the East Coast Wrestling Association. Revered for her technical wrestling prowess, Purrazzo has submitted many opponents with her feared Fujiwara Armbar. She has also wrestled in England, Puerto Rico, Canada and Japan, including competing in Tokyo’s world-famous Korakuen Hall.

A newcomer to the world of sports-entertainment, 24-year-old former gymnast Stacey Ervin Jr. begins his training this week at the WWE PC. Originally from Taylor, Mich., the 5-foot-8, 180-pound Ervin was a member of the University of Michigan’s 2013 NCAA Championship men’s gymnastics team. He has plenty of medals to his name, including the 2015 U.S. floor exercise bronze medal and the 2015 Winter Cup floor exercise silver medal. Ervin attended a WWE PC tryout in February, during which time he blew away scouts with his dazzling agility.

Luke Menzies, of Batley, West Yorkshire, England, comes to the WWE PC from the world of professional rugby. Standing 6-foot and weighing 260 pounds, Menzies played pro rugby for a decade, including for the Hull Kingston Rovers and Salford Red Devils, before setting his sights on the ring. Trained by British wrestling legend Marty Jones, the powerhouse has competed on the United Kingdom independent scene since 2016, and in November of that year, he attended a WWE tryout in Glasgow.

Seven-foot-tall, 290-pound Chinese boxer Taishan Dong— who was once called “the most intimidating boxer on this earth” by Sporting News — also joins the ranks of the WWE PC. Hailing from Lanzhou, the capital city of China’s Gansu province, Dong was formerly signed with Oscar De La Hoya’s Golden Boy Promotions. Nicknamed “The Great Wall,” Dong went 6-0 in his pro boxing career. He also boasts experience in basketball and kickboxing, including a 2013 defeat of international fighting attraction Bob Sapp.

Brooklyn, N.Y.’sMonique Jenkins, better known to wrestling fans as MJ Jenkins, also comes to the WWE PC from the independent scene. Originally trained by WWE Hall of Famer Johnny Rodz, Jenkins made her in-ring debut in 2011, and has also received coaching from the Dudleys at the Team 3D Academy. Jenkins has wrestled in the Northeast, New England, Florida and the Dominican Republic. She attended WWE tryouts at the Arnold Classic in 2016 and at the Performance Center last February.

Rounding out the new class is former All-American wrestler Denzel Dejournette. The 6-foot-2, 260-pounder grappled for the Appalachian State Mountaineers. He finished eighth in the 2017 NCAA heavyweight wrestling championships, is a three-time NCAA qualifier and a two-time Southern Conference Wrestler of the Year. After amassing 113 wins during his collegiate career, Dejournette impressed WWE talent scouts at a tryout in June 2017.

Stay with WWE Digital for more coverage of the new Performance Center recruits in the coming days.