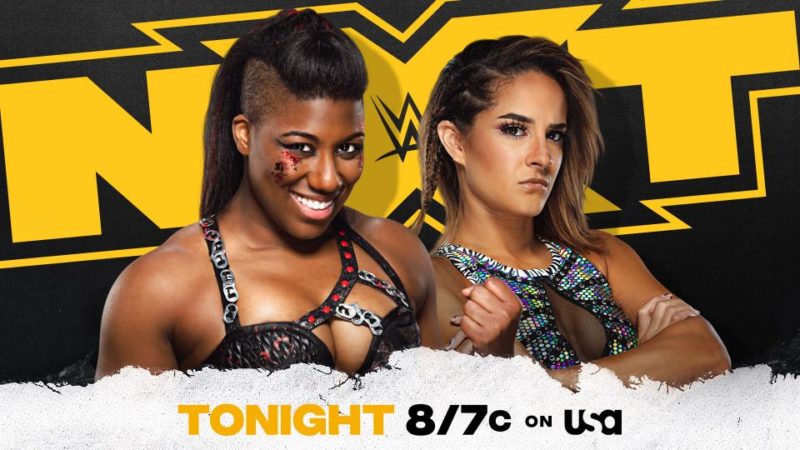 These two start the show with Raquel Gonzalez joining Kai ringside. The match starts fairly grounded, with not a lot of speed. It picks up as Dakota pulls moon into a turnbuckle and begins attacking the arm of Ember Moon. Ember finds a way to keep herself alive and the intensity increases on the outside as she delivers kicks of her own to Kai.

As the action returns to the ring, Ember tries to land heavy-hitting offense while Kai continues to work the arm. Ember is able to fire up against Dakota but when she heads to the top rope for an Eclipse Raquel Gonzalez jumps onto the apron, distracting her long enough for Kai kick her off. Kai then lands a Go To Kick for the win, leaving victorious against Ember.

Prior to the match, Grimes is interviewed backstage and is obviously still scarred by his match with Loomis last week.

KUSHIDA is in control, keeping Cameron Grimes close and maintaining a grounded match. Grimes tries to keep himself in rope range, but Kushida manages to keep picking him apart limb by limb. Grimes finally finds an opening and starts using his size advantage to try to gain lost ground in the bout.

Can @KUSHIDA_0904 continue his hot streak with a victory over @CGrimesWWE tonight? #WWENXT pic.twitter.com/fgtXFcFial

Grimes is knocked into the referee which means KUSHIDA can’t get the pin despite having Cameron dead to rights. Cameron Grimes manages to hit a Spanish Fly on KUSHIDA but before he can get the pin a new ref is out and it’s last week’s Zombie Ref, which startles Grimes allowing KUSHIDA to lock in the hoverboard lock for the win.

Drake Maverick/Killian Dain vs Ever Rise

Maverick and Dain have an early advantage, able to surprise the members of Ever Rise.  It isn’t long before Ever Rise is able to begin beating down Drake Maverick, who refuses to tag out despite being overwhelmed. A Picture-in-Picture comes up and Pat McAfee, Pete Dunn, and Lorcan & Burch are shown outside before coming into the building and laying out all competitors, taking over broadcast.

Pat McAfee comes through with an Undisputed Era banner, saying tonight he retires them. While he is a heel, McAfee makes some very valid points in everybody’s clear grievances with the Undisupted Era including Roderick Strong betraying Pete Dunne. McAfee is doing an outstanding job putting himself and his group over as the future of NXT. He then gives the option for the other three to vote on whether or not they raise the banner to the rafters, but decide instead to trash it. Dunne adds extra insult by burning the flag as well.

As they leave to get back to their car, Killian Dain attacks McAfee but is fought off by the other three members of his crew, including a door kick to the head by Pete Dunne. As they drive off we see that Dain’s mouth is bleeding profusely.

Gargano is at home celebrating his victory from Halloween Havoc, and talking about his love of wheels. Turns out he is playing the game of life with the Ghostface from last week who isn’t doing well at the game, but remains masked.

.@JohnnyGargano loves wheels, and can't wait to overcome 𝘵𝘩𝘢𝘵 one hurdle next week against a worthy opponent. #WWENXT pic.twitter.com/d4akTBbWcY

Shotzi comes out without the tank, but is immediately on the offense against Toni. Shotzi slips early on a springboard but quickly recovers and the match continues between both competitors with Storm also raising the intensity. Storm and Blackheart are not giving each other any time or space to recover, with Toni having a majority of control headed into the commercial break.

It’s Toni Storm vs. @ShotziWWE! Who will prevail in this one-on-one showdown? #WWENXT pic.twitter.com/DhLkgcngEx

When we come back from break, momentum has gone back the direction of Shotzi. Both add a bit of power to their offense as they try to suplex each other into oblivion. Suddenly Candice LeRae takes over the titantron and has Shotzi’s tank hostage in the middle of a road somewhere. While this is happening, Toni Storm manages to roll her up for the pin and win. Candice then pretends to stop a car from running over her tank before taking control of the Humvee herself and and running over the tank and revealing Ghostface riding in the back. This was apparently revenge her interference in the Women’s Championship and when we cut back to the ring we see a distraught Shotzi.

Thatcher is once again giving a lesson in Thatch As Thatch Can showing the reversal for a windpipe crush. He is once again abusing his student putting him in a joint lock beyond his tap. Later on in the demonstration he allows the student to put the hold on him but instead puts the student in a heel hook. After this, he’s attacked by his previous student August Grey, who seems to challenge him outright.

Looks like @augustgreywwe has a lesson to teach Timothy Thatcher this week! 😮 #WWENXT pic.twitter.com/fYxW6n7go4

Xia is backstage and reveals the letters have been from her family, and receiving another one she claims that she needs to challenge Raquel Gonzalez for dishonoring her. Mr Regal seesm to accept this.

Ciampa is immediately sadistic, aiming for the cast of Velveteen Dream, making sure to inflict maximum damage through aggression. Dream tries to lower the aggression of Ciampa with some early attacks but Ciampa is quick to rally, increasingly raising the intensity of his attacks. Dream  finds a few openings against Ciampa, using technique to battle Ciampa’s aggression. Both men utilize environmental damage from the apron and desk, Dream throws a chair into the ring and seems to try to use his cast while the ref gets rid of it but Ciampa intervenes with a high knee followed by a draping DDT and Fairy Tale Ending giving Ciampa the win.