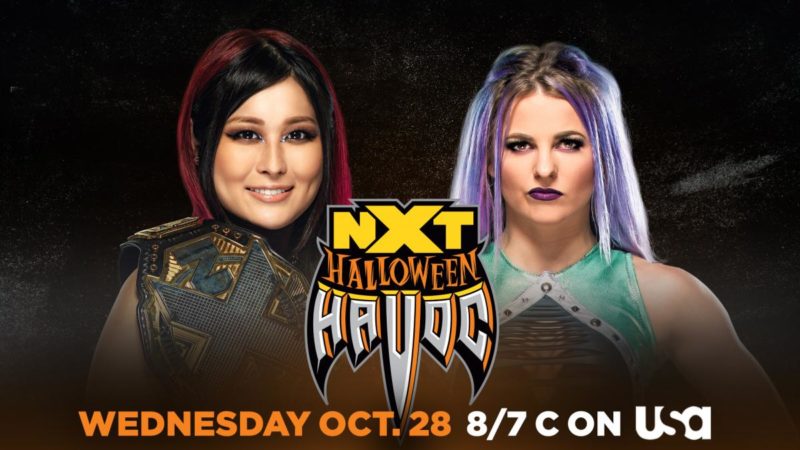 Welcome to the most spooky of nights as we provide results for NXT’s revival of Halloween Havoc.

Damien Priest and Johnny Gargano start off the show with Priest being played in live. Gargano is in some Jack Skellington inspired gear and Shotzi spins the wheel to reveal the match will be a Devil’s Playground Match. It doesn’t say what the stipulation means but Priest is aggressive.

It's time to SPIN THE WHEEL at #WWENXT #HalloweenHavoc! pic.twitter.com/mMT0ZT3xMh

Both grab weapons as Johnny gets a kendo stick while Priest wields a baton. The fight continues outside of the ring, going up the ramp and around the cage walls. They do come back with a graphic saying No Countouts, No Disqualifications, Falls Count Anywhere, and Anything Goes. The match continues to the back and even other parts of the set with a fun spot where Gargano superkicks a jump scare. He has Priest against a wall backstage and continues hitting him with carts and trash.

Even during picture-in-picture Damien Priest is able to get back in control, kicking Gargano through set pieces. They make their way to the top of the set where the wheel is and the battle is prolonged between both. A Ghostface shows up with a steel pipe and beats down Damien Priest, though Gargano looks on confused as the interloper leaves. Gargano then knocks Priest off the platform with a tombstone and through a house which crumbles to dust. Gargano crawls to the champion, pinning him for the win and becoming the NEW NXT North American Champion.

Pat McAfee is in the ring with Lorcan and Burch talking about his prior debut at Takeover 30. He heavily puts himself over for his accomplishments in media huge and goes through his step by step plan to attack Undisputed Era. As he goes through the help he got from Ridge Holland and starts to get Burch and Lorcan to hype him up. He starts getting mics for Lorcan and Burch but Kyle O’Reilly comes out to face off with them. Suddenly a surprise return from Pete Dunne as he brings down a chair for KOR as well. Curse his sudden yet inevitable betrayal, Pete Dunne attacks O’Reilly and the rest gang up to beat him down.

Santo sEscobar is wearing tights inspired by Rey Mysterio’s classic purple Halloween Havoc gear. Santos seems to not take Atlas as serious competition and gives him an out to quit, but Atlas fires up. Atlas manages to hit the Cartwheel DDT but Legado Del Fantasma put Escobar’s foot on the rope. Atlas puts up a valiant fight against the two peons, but a suspiciously masked headbutt from Raul Mentoza allows Escobar to get the win against Atlas.

Prior to this match Mr Regal is forced to escort Cameron Grimes to the parking lot to be picked up for his match. The van shows up and Michael “P.S.” Hayes is part of the pickup crew.

We have another Cinematic Match which has a Marilyn Manson song as its backing. Grimes is clearly terrified as he tries to find Loomis in the area. Grimes is finally found by Loomis as he enters the house and discovers himself unable to escape. Cameron finds himself in the bathrooom and tries to hook up with a random showering woman who turns out to be a ghoul. Grimes finds his way out of the house tafter being chased by ghouls and goes back to the car to escape. Dexter Loomis is the driver and Grimes runs off for the match to be continued later.

This match starts off as a brawl. Not a lot of finesse, pure attack from both. Great spot as Raquel catches Rhea on the outside and pulls her up for a powerbomb. Raquel is dominating Rhea throughout, but Rhea endures and the brutal match comes to an end with Rhea hitting a riptide for the win.

Drake Maverick is backstage as Hogan, but turns out he gets humped by The Yeti and The Giant while Killian Dian shows up as The Shockmaster.

Grimes ran all the way back to the Capitol Wrestling Center and is frightened in the graveyard by a pair of ghouls. When Grimes escapes into the ring Dexter Loomis shows up behind him and the two scuffle. Grimes tries to fight off the ghouls but Loomis weaponizes them before putting Grimes to sleep.

Poppy plays Io to the ring and the match is Tables Ladders and Scares as judged by the wheel. So there won’t be a pinfall or submission to win, the title must be retrieved from above the ring. Scares come into play quickly as Candice brings a bag to dump out and it’s filled with dismembered body parts.

The match has plenty of brutality and runs past the normal runtime of NXT. The two seem focused on beating down each other. After both going through a table the mystery Ghost Face Wrestler brings Candice into the ring and nearly gets her the title, but Shotzi comes out and drops Ghost Face onto chairs. Candice nearly seals the win but Io tosses Candice off the ladder through another ladder on the outside, climbing and winning hte match to Retain her NXT Women’s Championship.

TABLES. AND LADDERS. AND SCARES. Oh my!@CandiceLeRae & @shirai_io put it all on the line at #WWENXT #HalloweenHavoc! pic.twitter.com/FbYNWsPHVK