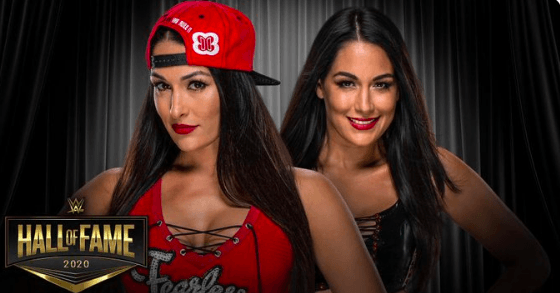 As announced earlier today, WWE confirmed that The Bella Twins will be inducted into the Hall of Fame this year.

Both women made an appearance on this week’s SmackDown in a Moment of Bliss segment with host Alexa Bliss. There, the announcement of their induction was made and they were quite elated to learn this.

BREAKING: The @BellaTwins are the latest inductees into the WWE Hall of Fame Class of 2020! #WWEHOF https://t.co/b8A9OrMMvl

The two women discussed their induction with Alexa Bliss and were soon joined by Brie’s husband Daniel Bryan and her daughter – Birdie Joe Danielson.

JUST ANNOUNCED! The @BellaTwins will enter the #WWEHOF as a part of the Class of 2020!!#SmackDown @AlexaBliss_WWE pic.twitter.com/xhEBxAZu5s

The reports of the Bella Twins’ induction were circulating all around the internet before this official announcement. We congratulate the Nikki and Brie on their much deserved Hall of Fame induction.