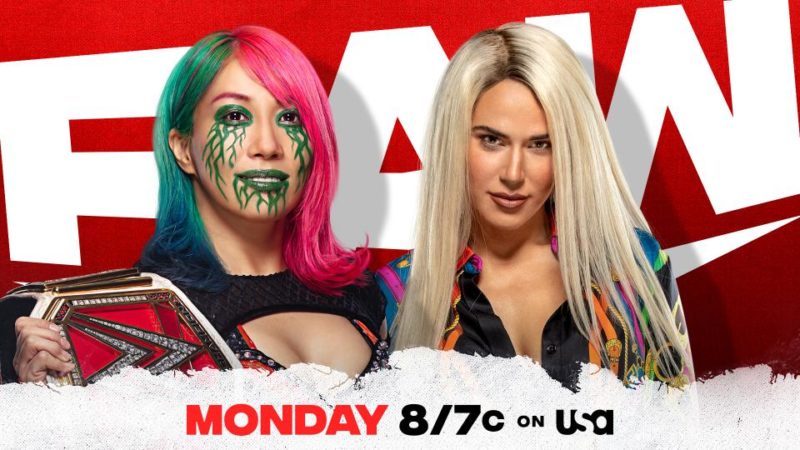 Alexa Bliss opens the show introducing The Fiend while basking in the Red Light. As The Fiend joins Alexa in the middle of the ring Retribution makes their way to the ring. Ali puts his hand up and the lights go out, Alexa and The Fiend disappearing.

The Hurt Business vs Retribution

Ali joins his Retribution followers in this match, and is definitely more competent than his cronies. Mustafa Ali is able to use his familiarity with Alexander to his advantage, though as the two groups meet on the outside, the fiend interupts via titantron. T Bar gets caught in The Hurt Lock and taps out, giving the win to The Hurt Business.

Immediately after the match ends the lights go out and The Fiend is next to Ali. He tries to attack Ali but Retribution interferes, with The Fiend leaing T-Bar laid out with a Sister Abigail. After this Alexa Bliss pops up on the titantron and mouths “Let him in” before cutting to commercial.

AJ Styles gives a promo with a lot of biblical references about his return to Raw. Jordan Omogbehin just stands behind him and shows off the incredible height disparity between the two competitors. Before the match the ref tries to kick him out of the ring but when he starts counting Omogbehin grabs his wrist before walking to ringside.

There is no officiating when this man's around.#WWERaw @AJStylesOrg pic.twitter.com/rgKuVHgR4K

Matt Riddle is dominating AJ Styles, and continues his attacks sending AJ outside of the ring. He flinches when Jordan walks in front of him when he goes to attack AJ, rolling back into the ring. The match continues between Styles and Riddle, but the mere presence of Omogbehin is enough to make Matt Riddle hesitate and be caught in a Styles Clash for the win.

It looks as though @SuperKingofBros has a GIANT problem on #WWERaw!

And that's a problem solver for @AJStylesOrg! pic.twitter.com/Ko4I7SDlbe

Drew is backstage addressing Randy Orton talking about his attack on the Legends and how he manipulated Drew into accepting this challenge. He also says that it won’t be surprising if he show’s up to Randy’s address later tonight from inside Hell in a Cell

Lana is able to quickly get out of the way of Asuka’s early attacks, quickly getting to the ropes. She tries to get some offense in but is easily outmatched by Asuka who wins with an Asuka Lock. Once the match ends Nia and Shayna come out and attack Asuka as well as putting Lana through the commentary table again.

After the match Nia and Shayna put over their abilities as a tag team and put an open challenge out to the locker room, which three teams accept. The match almost immediately spills to the outside with Lacey and the Riott Squad flying into the fray. The match devolves into chaos as everybody gets their moves in, though it continues to show off the tandem work of The Riott Squad. Though they do the heavy lifting it’s Nia that’s able to get the pin on Lacey Evans to earn the bragging rights.

You better believe that!! pic.twitter.com/yYWfuJ9vgO

Elias is onstage with a full band backing him. He perform’s his song “Amen (I’m Goin’ In)” from his upcoming album Universal Truth. This is legitimately a concert performance, doesn’t seem to be a gimmick or angle to this. It’s a pretty legit song in my opinion, but I’m a wrestling journalist not a music critic.

Elias goes to perform an encore, but his guitar tech starts playing the guitar instead of handing it to him. It’s revealed to be Jeff Hardy, and he tries to attack Elias before his music hits and Elias runs off.

Elias is backstage upset about his performance being interrupted, so he challenges Jeff Hardy to a match at Hell in a Cell.

Miz and Morrison are backstage talking about Mandy calling him petty on Raw when Tucker confronts them about what they’re doing to Otis. Tucker says he’ll find a partner tonight and teach the two a lesson.

The New Day start talking about how they haven’t been on Raw for 4 years. Sheamus interrupts them about being broken up but they say that The New Day are still as united as ever just on different brands. Woods then offers a challenge by Kofi to Sheamus. The two have excellent chemistry from years of working together. They show Big E in the Thunderdome watching this match and supporting his boys The New Day.

Sheamus is ready for all the offense Kofi throws his way, able to maintain dominance while Kofi remains resilient. Kofi gets himself an opportunity after giving a Russian Leg Sweep from the top rope. Kofi tries to set Sheamus up for an SOS but he reverses though ends up getting caught with a Trouble in Paradise.

Ali gives an update on what he was able to do in his time off and reveals that he can cause chaos with a laptop, cell phone, and information. He also reveals that he was the Hacker and knows how to find those that need something more and bring them to greater glory. He says because the company didn’t know how to make money dreams were dying and he is reviving them.

Tucker has found a partner in the world’s greatest up and coming Luchador “El Gran Gordo” which is quite obviously Otis in Pink Trunks, Cape, and Lucha Mask complete with the lunchbox.

Miz is excellent on the mic as he cuts a promo on the Underdog nature of Otis. Tucker is isolated by the heels during this match but once El Gran Gordo gets into the ring he’s able to clear the ring. Miz looks like he has El Gran Gordo dead to rights in the match, but R Truth interrupts with the 24/7 contenders in tow which allows El Gran Gordo to deliver a splash, caterpillar, and Vader Bomb for the win. After the match they’re backstage celebrating with The New Day and Mandy Rose gives El Gran Gordo a Ham in celebration.

Bray is unpacking his moving box and says that while he’s sad to leave his SmackDown friends he looks forward to new friends on Raw. As the puppets make their way into the set there is a knock at the door as Alexa Bliss appears in the Fun House to say they are just getting started.

This is a rematch from their match that was interrupted. THe two immediately start using their respective masses against each other. Keith seems to be able to match Braun Blow for Blow, but Braun sneaks a headbut to the balls of Keith Lee, allowing him to hit a boot to get the pin. As Strowman celebrates, though, Keith Lee takes Braun to Dick Kick City and berates him for taking a shortcut.

Orton delivers a promo putting over his accolades in the Cell. He discusses his rich history of matches inside Hell in a Cell including matches against Jeff Hardy and The Undertaker. Drew McIntyre comes out and tries to get Randy to face him, but when Randy refuses Drew gets bolt cutters and enters the Cell as the camera fades.

There's no escape for @RandyOrton … OR @DMcIntyreWWE THIS SUNDAY at #HIAC! #WWERaw pic.twitter.com/BuNV4VBlE3