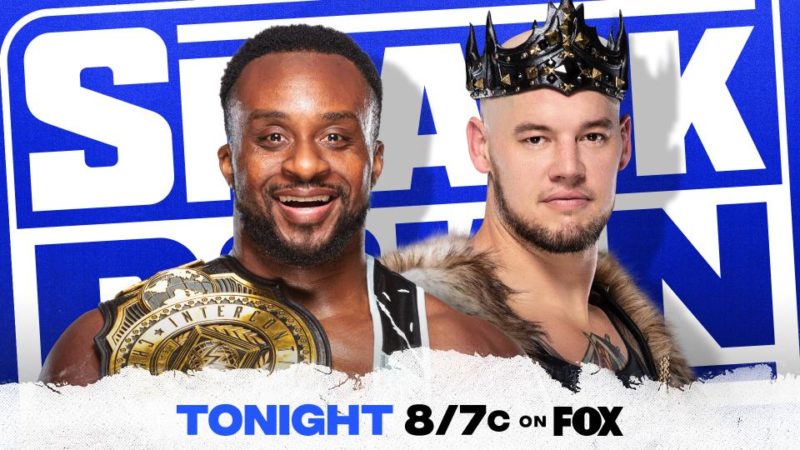 Roman Reigns makes his way to the ring flanked by Jey Uso and Paul Heyman. Roman begins talking about his Golden Touch and those he surrounds himself with. Kevin Owens comes out to interrupt him but Roman continues to speak not giving KO any time to spotlight.

Kevin Owens declares himself vindicated since Roman has consistently proved he cannot retain his title without his family. Tonight KO wants to face Jey in singles action. Later in the show, Adam Pearce says he can’t give him Jey, but when KO asks for Roman instead, Jey is magically his new opponent for tonight.

"The Big Dog is long gone and he's been replaced by a giant b*tch!" – @FightOwensFight to @WWERomanReigns #SmackDown pic.twitter.com/k6q5YJ0kIl

The match is short, with King Corbin looking to use his reach against the size and strength of E. Sami Zayn runs out and attacks E, and when the Knights of the Lone Wolf join in on the attack Apollo Crews runs out to make the save.

The match looks to develop some new potential as Zayn and Corbin get into an argument causing Corbin to abandon his partner and Apollo Crews getting the pin.

After the match, Big E makes references to Brodie subtly in his promo about being champion.

It initilaly looks like Billie Kay will be teaming with Tamina, but Natalya comes out and it’s announced that Billie Kay is just accompanying the pair. Billie Kay gets a lot of focus on the outside, trying to guide the duo but they fall short with Liv Morgan pinning Tamina

Some great heel energy between Carmella and Bayley, with both of them putting the strain on Bianca. Belair is able to use her athletic advantage to escape the clutches of Carmella and bring Sasha into the ring. Sasha tries once again to use her hair as an extended tag rope, but Bayely interrupts only to find herself laid out by Bianca.

Reginald shows off his athleticism with a sommelier Backflip off the apron. This is enough of a distraction for Mella to hit a Mella Buster, spiking the champion Sasha and getting the pin on her for the win.

#SmackDown Women's Champion @SashaBanksWWE has encountered an obstacle in this tag team match… a negative one! pic.twitter.com/9lqE7jV4Om

The SmackDown Tag Team Champions, Street Profits, reveal they have a drumset in the ring so they can talk about their predictions for 2021. Turns out Robert Roode and Dolph Ziggler aren’t fans of their Tonight Show schtick and attack the champs, lying them out in their own celebration ring.

Chad Gable is ringside for Otis, and it shows they were training with Daniel Bryan earlier in the night. This match is full of technical wrestling ability, and Gable continues his role of coaching from the outside. Bryan is briefly aken out of the match, but Otis is able to keep up with the onslaught of both Nakamura and Cesaro. Bryan gets back into the ring and after an exchange between Nakamura and Bryan, Bryan gets the submission win with a Labelle Lock.

KO is on a tare, with incredible aggression and disposes of Jey Uso in little time, not letting him get meaningful offense in. After the match he delivers another stunner to Jey Uso. He then cuffs Jey to the ropes and continues stomping him, waiting for Roman to come out to the ring. He gets tired of waiting and unlocks the rope cuff, leaving Jey in the handcuffs. As KO sets up Jey to be splashed, Roman comes through the Thunderdome Audience to attack Owens, soon followed by Jey.

They throw him off the Thunderdome through an equipment table and the show ends with him being checked on by officials.