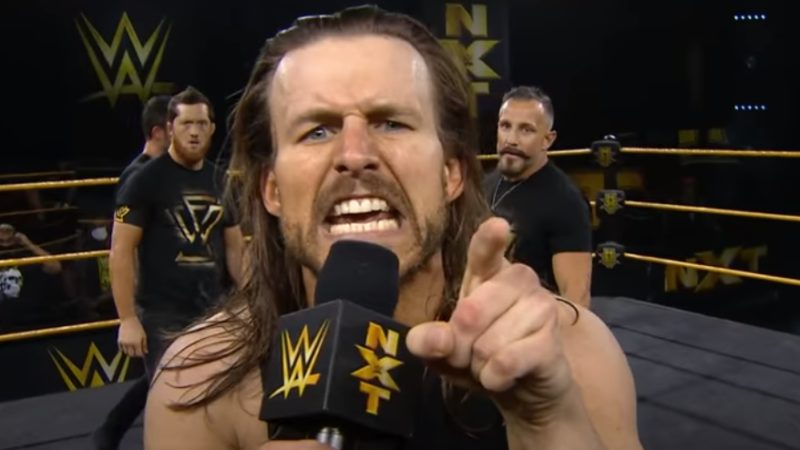 Adam Cole recently spoke with TV Insider for an interview to talk all things pro wrestling, including whether he still wants to move from the black-and-gold brand of WWE NXT up to the main roster in WWE via either the Monday Night Raw or Friday Night SmackDown brands.

Featured below are some of the highlights from the new Adam Cole interview.

On a possible move from NXT to the main roster of WWE on either the Monday Night Raw or Friday Night SmackDown brands:

“To say I never want to Raw or SmackDown would be an absolute lie. I think someday it would be cool to try my talents over there. At the same time, one of my favorite parts of NXT aside from the fact I really do believe in the show is being involved in something on the upswing and something that’s growing. I remember when I was in Ring of Honor. There was a really cool thing that was happening where Ring of Honor was blowing up a little bit. We were selling out the Hammerstein Ballroom and forming a relationship with New Japan Pro Wrestling. It was so exciting to be part of a group you feel is really blossoming into something special. I feel like NXT is really blossoming into something special. Selfishly, I don’t want to miss out on that. I’m really enjoying my time here and feel there is more for me to do. I feel like there is more for the Undisputed Era to do. As a group, we have been a dominant force in NXT. ’m in no rush to leave NXT. At the same time do I think the Undisputed Era would be effective on Raw and SmackDown? Absolutely.”

“The approach is totally different. Truth be told every time I wrestle and perform, I want people to enjoy it. I want them to have a great time watching an Adam Cole match. I’ve never had a match like the one I’m having with Pat. Where the sole mission is to make sure he doesn’t come back. He gets this one chance because he set me off at the right place, right time. It’s TakeOver XXX, which is a massive event. There is a locker room full of guys who would kill to be on this show. Some of them are not going to be on this show because Pat McAfee is taking their spot. When you say that out loud, that is crazy. My main goal is to make him regret this decision. He is offensive to me. Offensive to our locker room. I’m excited to move past this. I can’t wait for TakeOver, but I’m excited to put this behind me. “

On his reign as WWE NXT Champion being the proudest moment of his pro wrestling career thus far:

“It’s really weird. For so long being NXT champion, to this day it’s probably the proudest moment of my career. To be able to say I was the longest-reigning NXT champion. When you look at the past champions, it’s the best of the best. That championship was important and special to me. Transitioning to wondering what I have to do to get back there and being champion. It’s definitely a battle. For so long I would say in interviews I was the best NXT has to offer. With the championship, nobody can argue that. So it’s not the greatest feeling to have right now. I’m still proud of the run I had. It would be cool to be a two-time NXT champion. I want to get back to it.”

On whether or not he is focused on what AEW and his girlfriend Dr. Britt Baker are doing:

“I think a lot of people know I’m very good friends with a lot of those guys. I’m dating Britt. I’m very friendly with a lot of people there. Even though we do have this competition on Wednesdays. When we’re focused on our show, we’re focused on our show. We’re not thinking about what they’re doing. At least I don’t. I’m not sure what anyone else is doing. I don’t have the ability to multitask mentally like that and think about what the other show is doing. I worry about what I’m doing and how to make my segment, my match, my whatever it is the best it possibly can be. Talking to them, I can tell you they feel the same way. They want to make the best show possible.”

Check out the complete Adam Cole interview at TVInsider.com.