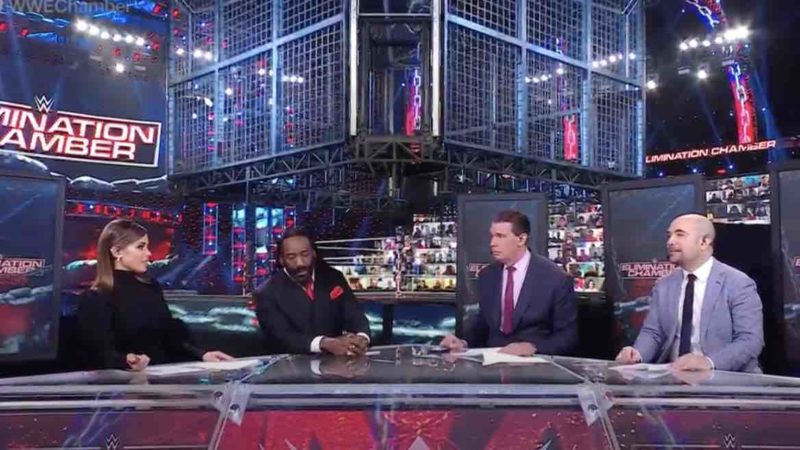 Booker T used Jim Ross’ phrase ‘business is about to pick up’ when discussing Lacey Evans, Ric Flair, and Charlotte Flair on the WWE Elimination Chamber preshow on Sunday, and said their colleague used the phrase, seemingly having to correct himself with a past tense since JR is working for AEW as their play by play announcer. Jim Ross infamouly called Kenny Omega the ‘WWE Champion’ on Dynamite this past week, so it may have been a tease back from WWE.

WWE were forced to pull a big name from Elimination Chamber. Cesaro also appeared on the preshow, and he spoke to the New York Post today regarding if he considered leaving WWE.

“Of course, you start to think, ‘Okay, what are other options or other possibilities? How can [I] improve my standing maybe through some outside ventures or whatever?’ But in the end, I just figured, ‘Okay, when the right moment comes I’ll be ready and I’ll knock it out of the park.’”

He then discussed possible being in the title picture around WrestleMania like Kofi Kingston in 2019.

“Just two years ago we had ‘KofiMania,’ right?” Cesaro said. “That was kicked off by [the] Chamber, as well. As much as I feel every moment of the year is important, this part of the year where it goes into WrestleMania season is overdrive. It’s important to pick up some momentum and it’s also really hard to pick up some momentum. I feel like I’ve managed to do that. I’m extremely excited. I’m also excited for all the people who have been supporting me over the past years. Hopefully, I make them proud.” You can read the full interview at the Post.