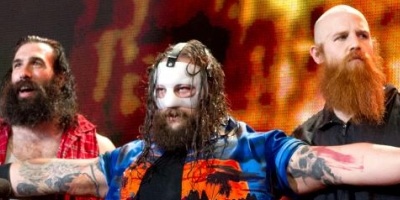 During this week’s episode of Friday Night Smackdown, Bray Wyatt’s Eater Of Worlds gimmick made a return. Due to this, fans have speculated we might see a return of the Wyatt family.

The Wyatt Family will be difficult to fully get together. Luke Harper is now actively wrestling for All Elite Wrestling as Brodie Lee, where he is the leader of The Dark Order.

Erick Rowan’s non-compete clause is reportedly up on July 15th. This will be a few days before Extreme Rules, which will be taking place on July 19th.

Bray Wyatt took to Twitter and posted a photo of himself, Erick Rowan, and Braun Strowman when they were part of the Wyatt Family. He tweeted the caption “Daddy’s back,” with the hashtags #LetTheSinBegin and #DownWithTheMachine.

Reports suggested that Bray Wyatt vs Braun Strowman will be a cinematic affair, so fans can expect a lot of interesting developments during the match.