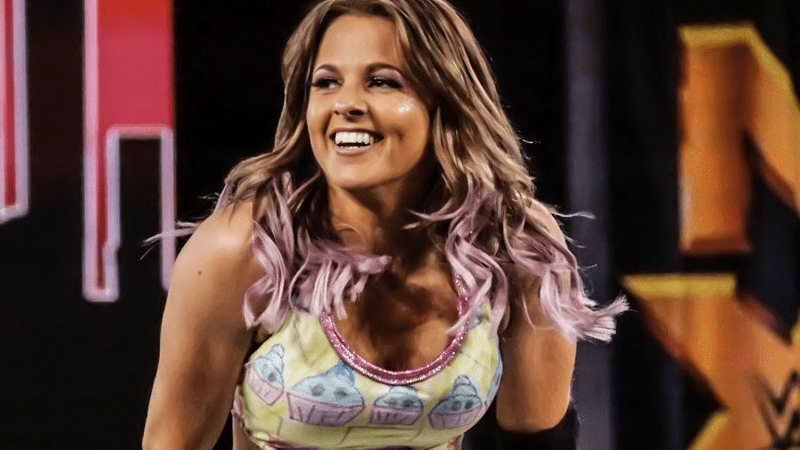 NXT WarGames always deliver on the promise of putting up brutal matches, and this year was no different. The women’s WarGames match, which opened the event, had Candice LeRae leading Toni Storm, Raquel Gonzalez, and Dakota Kai against Shotzi Blackheart’s team.

During the match, it seemed like Candice LeRae had broken her arm in a segment with Shotzi Blackheart where the latter jumped off a ladder on the former, who had a chair in her hands.

Triple H had said in the post-event media conference that LeRae was getting checked out and an X-ray would be taken of the arm. In a recent interview with PWInsider, the Poison Pixie clarified the status of her injury.

Candice LeRae admits the injury freaked her out

Candice LeRae revealed that the arm is not broken, but she is still sore from all the bumps she took at WarGames. But she feels great now, all things considered. (Via 411Mania)

“I feel great. All things considered, I think whatever little tiny bits of me that are still a bit sore, I’ll take it, because my arm – no break – it was a Christmas miracle. I know. It was hard to believe, I was like this is definitely broken, we went to the ER, got x-rays…even our medical team looked at it and I want to say within 24 hours I was able to pretty much use my arm and my fingers all again.”

Candice LeRae also detailed her immediate reaction after she realized her arm was hurt. After the impact, LeRae asked the referee for the doctors to take a look at her. She felt pain in her ribs and could not move her arm, but refused to leave the cage, as that might have meant a loss for her team.

Speaking on the extent of the injury, Candice LeRae said that it was a deep tissue bruise that ‘mushed up all the cartilage and stuff’. But she was hoping it was not broken, as she did not want to take time off now and keep it for when she would have kids later.