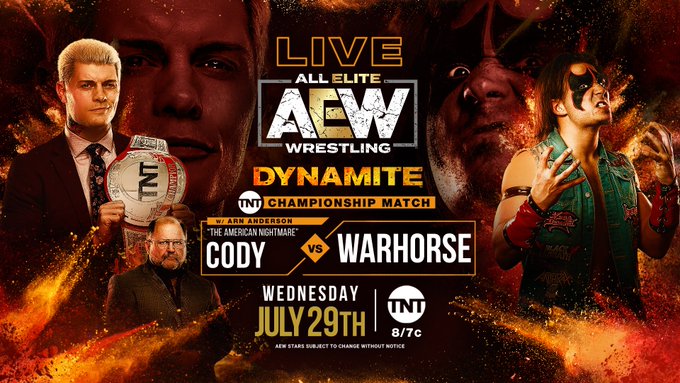 Cody Rhodes will defend the TNT Championship against WARHORSE on AEW Dynamite this Wednesday. Thanks to quite a huge campaign of his fans on social media, with the tweet #CodyfearsWARHORSE nearly trending on a weekly basis, AEW decided to give the IWTV Independent Wrestling Champion a shot.

You asked for it. You got it.
Next week on Dynamite – @CodyRhodes defends his TNT Championship against the challenger @JPWARHORSE.

The aggressive metal-inspired performer has the opportunity of a lifetime on Dynamite. When asked about WARHORSE by a fan, Cody Rhodes claimed he wasn’t overlooking his opponent, though the tweet doesn’t exactly read that way.

He’s got a groundswell of support and buzz, that usually comes for good reason. Is he on my level? I don’t think so. But I am not taking him lightly. I want to hold this belt until I retire.

Cody has gotten cockier each and every week and is becoming more desperate to hold onto the title. Will his arrogance cost him the TNT Championship this week? Tune in and find out.