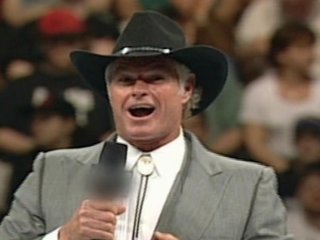 “I was with Steve for about a year, maybe more, in WCW. We had the run with Brian Pillman and the Chicken Match and all that. It was just a real good time. During that time, I was making a trip with Steve and he told me he would be leaving. I was just shocked because he had a good contract, a really good contract. One well up into the hundreds of thousands of dollars! He had said he was done with WCW and wanted to go to WWF. As an old timer, I advised him ‘You don’t burn these bridges because if you do, you can never go back. If you do, things are never the same. Maybe you should do your year up and finish your contract and doing business on the up and up and then going in [to WWE].’

He was like, ‘No, no, no. I’m very unhappy.’ Of course, he did not advise me about the new character of ‘Stone Cold’ and shaving his head and all the stuff that had happened that made a lot of his success take place. Nevertheless, he went against my advice. When I saw Steve when I went in there in 1998 in WWF and he was doing so well and he and Vince were having the big feud. That year, he had made $10,000,000! [Laughs] He was able to look at me from across the dressing room and laugh. He said, ‘You know, Col. He’s got all his stuff together. He’s got everything. But, don’t let him handle your money!’ [Laughs] He was exactly right!”

You can check out the full interview here.