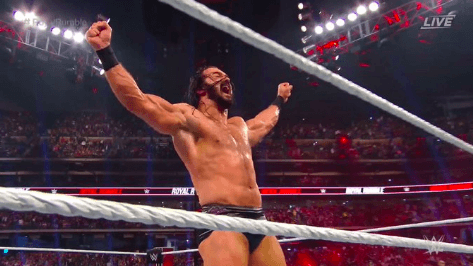 After what could easily be said to be one of the greatest Royal Rumble matches of all time (for obvious reasons), Drew McIntyre stood tall in the ring as the victor.

The Scottish Psychopath entered the match at #16 and came face to face with Brock Lesnar, who was in the midst of his eliminating streak. However, Ricochet, who had entered the match before McIntyre, hit Lesnar with a low-blow which allowed McIntyre to hit the Beast with a Claymore and eliminate him.

McIntyre then went on to eliminate many other Superstars and was thoroughly dominant throughout the match. In the end, it came down to McIntyre, Reigns and the returning Edge.

Reigns took out Edge and got back into the ring to finish business with McIntyre. However, after a few back and forth blows, the Scottish Psychopath hit Reigns with a devastating Claymore kick and eliminated the Big Dog to win it all.

This is a well-deserved victory for McIntyre, whose journey up to this very moment has been absolutely wonderful. It will be interesting to see if McIntyre picks the WWE Champion or the Universal Champion.

But if you were watching the match, then you probably know the answer to that one!