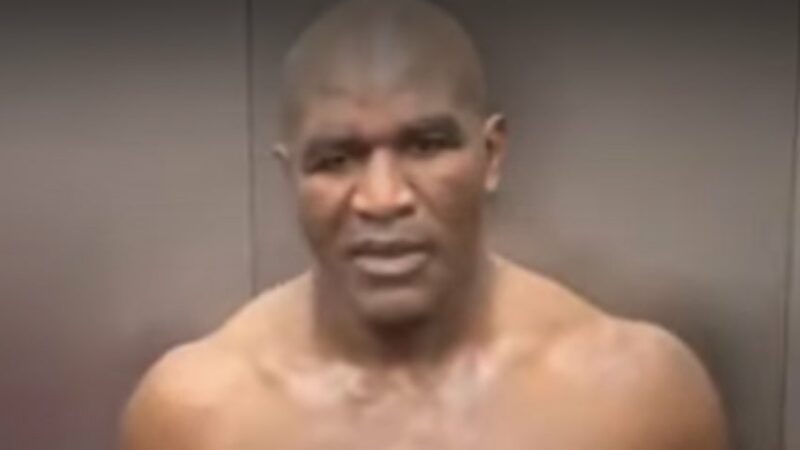 The legendary pro boxer Mike Tyson got involved in a controversial incident during his infamous fight with Evander Holyfield. That contest had ended after ‘Iron’ Mike took a bite out of his opponent’s ear. ‘The Real Deal’ recently admitted that he was considering biting his rival in the face. It is one of the most horrific actions in boxing history. The matter is still talked about to this day.

Tyson was disqualified from the match and after the fight. Before the disqualification, Tyson was complaining about illegal headbutts from Holyfield that opened up a cut above his eye. He came out of his corner without his mouthpiece in the third round, before being forced to put it back in. The bite took an inch of cartilage off of Holyfield’s ear as he shrieked in pain in the middle of the ring. The gloves that Evander Holyfield wore in the infamous match against Mike Tyson recently went under the hammer.

Holyfield recalled that his first reaction upon getting bit was to turn around and threaten to bite Tyson’s face off [via NY Post:

Asked if he knew immediately that Tyson bit his ear as opposed to having landed a punch on him, Holyfield stated matter-of-factly,

“Anytime someone bites your ear, you know!”

As far as what he remembers, as to whether he did it on purpose or if he blacked out, Tyson admitted:

“I really didn’t black out. I was like f–k, he was kicking my ass, and I just got crazy and I bit him.”

Earlier this year, Mike Tyson made headlines for releasing psychoactive gummies in the shape of an ear, a nod to his rematch with Evander Holyfield. While the item has been a success all around the nation, they cannot be sold in Colorado. Despite the state being one of the most pro-cannabis areas in the United States, they passed a law in 2016 prohibiting gummies from being sold in the shape of body parts.