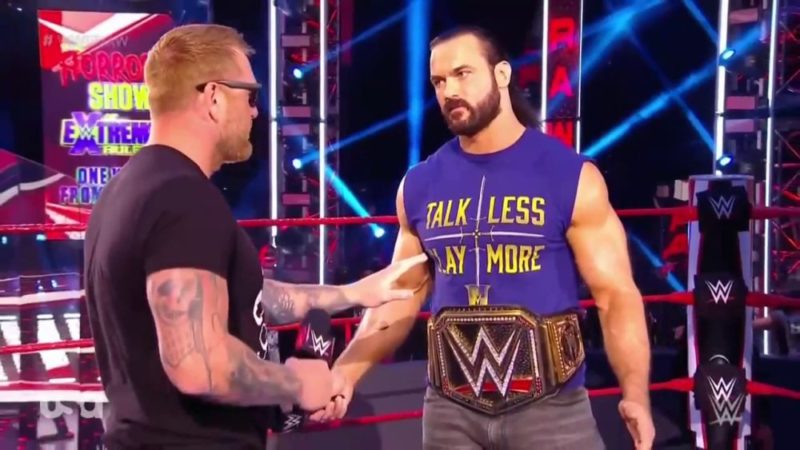 This week’s episode of RAW kicked off with Drew McIntyre demanding that Dolph Ziggler reveal the stipulation for their match at Horror Show at Extreme Rules. Ziggler had a surprise planned for McIntyre.

Ziggler came out and he brought back Heath Slater, who is Drew McIntyre’s former 3MB stablemate. Slater came out and cut a promo on McIntyre. Slater mentioned the last time the two spoke was on WWE The Bump and that he came to RAW to fight for his daughters.

Slater demanded a match against McIntyre but he did not want to fight his friend, so Slater slapped him. The match was made official and he was squashed after McIntyre hit a Claymore Kick.

Following the match, Heath was interviewed backstage on RAW. He was happy for his friend McIntyre and then said it was “the closing of a chapter.”

“This was something that had to be done. Me and Drew we go way back and he promised me something and you know I wanted it, so thank god it happened. He’s the man, the champ, my brother both inside and outside the ring. I’m pretty sure that he loves me after he helped me up and gave me a hug. No, this was a nice closing of a chapter. So let’s see what the future brings for me.”

With his no-compete clause ending this month, we will have to see what the future holds for Heath Slater.

EXCLUSIVE: It was an emotional night and the closing of a chapter for @HEATHXXII on #WWERaw. pic.twitter.com/qYcBe5D1Dy