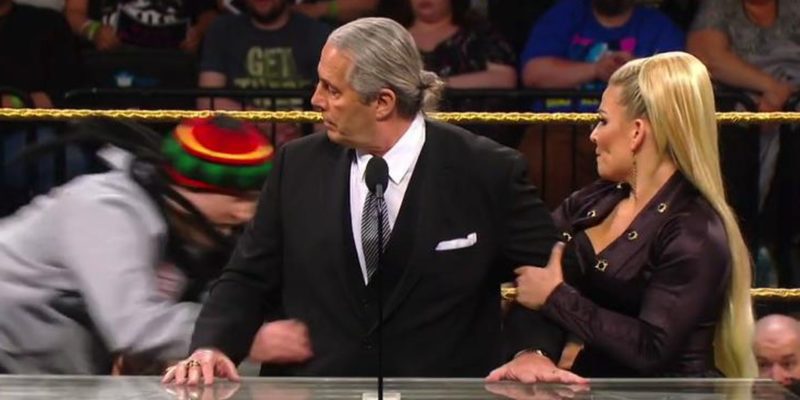 During the WWE Hall Of Fame Ceremony, Two Time WWE Hall of Famer Bret Hart and his Niece Natalya were attacked in the ring in the middle of their acceptance speech.

The attacker was arrested after being beaten up a bit by some of the roster during the altercation. CBS Sports has reported the name of the attacker as Zachery Madsen. Madsen is an MMA  fighter with a record of 2-1.

It was also reported by Arash Markazi of The Los Angeles Times, that the man was charged with 2 counts of 3rd-degree assault and disorderly conduct. However, CBS Sports reported that Madsen was taken to the NYPD’s 78th Precinct in Brooklyn to be charged with two counts of assault and trespassing.

They also reported that a security guard who was restraining him suffered minor injuries in addition to the minor injuries Hart suffered. The assailant punched Bret once and then tackled him.

Please keep in mind that my check engine light is on, I've driven well over 5000 miles without an oil change and I don't have a GPS. Additionally, the only bigger joke than my car, is my sense of direction.

You have time to retweet, but not to respond to my messages … pic.twitter.com/HNZkFuyBNJ

A FOOL! You got that @VinceMcMahon ??? This is an abomination! You're a bigger fool than the officers responsible for arresting Becky, Charlotte, and Ronda tonight. What's the matter, old man?!? Why are you ignoring my messages?!? THIS IS NOT A GAME!! THIS IS A FIGHT!!!

"Begin each day as if it were on purpose."

Good morning @WWERollins @WWERomanReigns @TheDeanAmbrose This is just your daily reminder to laugh at the deaf kid. And yes, Ive lost control again.

It is a relief that Bret wasn’t seriously hurt and the situation was handled promptly.