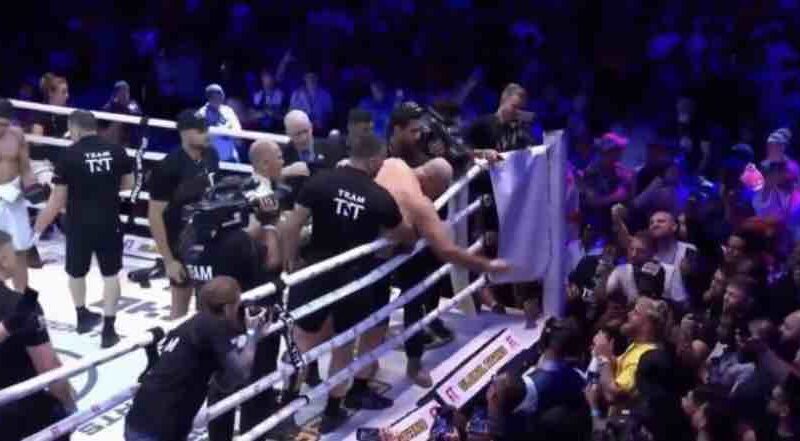 Jake Paul commentated on Tommy Fury’s fight at Floyd Mayweather vs. Deji, and Paul wore a Hulk Hogan ‘Hulkamania’ shirt and came out to “Party in the USA.” Paul ripped Tommy’s poor exhibition fight performance, and after Tommy’s Dad John Fury took off his shirt, with Tommy and John challenging Jake to get in the ring.

Tommy mocked Jake for ripping off Hulk Hogan with his shirt and wrestling type persona at the event, saying, “Come on Hulkamania.” Jake didn’t get in the ring, telling Tommy and John to fight him outside. Tommy lunged at Jake.

Jake Paul wearing a Hulk Hogan shirt and getting an entrance to an event he isn’t fighting at and coming out to Party in the USA😂 #MayweatherDeji pic.twitter.com/ft4vAiea15

It has come to light that the WWE boxing match between Matt Hardy and Evander Holyfield in 2016 almost didn’t happen, due to WWE Hall of Famer JBL.

On the latest episode of The Extreme Life of Matt Hardy, the AEW star talked about working with Evander Holyfield while working for WWE and how Fit Finlay tried to pay him $1,000 to knock out the legendary boxer.

“I remember there was a huge deal,” Matt Hardy recalled. “Fit Finlay was the ringleader of this movement. He said, ‘Matt, I swear to God, if you out there and you knock him out, I’ll give you $1,000,’ he said, ‘Who else will give him $1,000 If he tries to knock him out?’ And then there was this whole thing going on in the room, and I’m like, ‘You guys are gonna get me f*cking killed! I’m trying to be a professional here!’”

Hardy chimed in and went on to reveal that JBL’s comments about Holyfield’s personal life almost caused the boxer to walk out on the company before appearing on the broadcast. JBL made holyfield and his wife furious with his bold claims and the plans almost fell through:

“And then speaking of getting people killed and whatnot, a very funny story I would like to interject here. So guess who was doing commentary for this event? There was JBL on there, and there was a point where he was talking with someone, and their feed was on, and it was live. You see these hot mic moments now in politics; it happens a lot, right?

“So they were on a hot mic, and someone had asked Bradshaw a question and said, ‘Oh my God, what do you think about Evander Holyfield? Are you gonna go back and talk to him? Does your wife want to take a picture with him?’ Bradshaw said, ‘Well, hell! I want to keep them as far away from my wife as I can. I think he’s got babies with several different women.’ He said that comment or something like that, and apparently, he does. He’s got some kids with different women or whatever the deal is. That’s not the point here. I’m just saying he wasn’t making that up. But then, in reality, that feed was also going into Evander Holyfield’s locker room.

“And the speaker was on, and they heard this, and his manager was his new fiancée/wife. So then she got furious over this, and they went to Vince, and they almost pulled out of this.