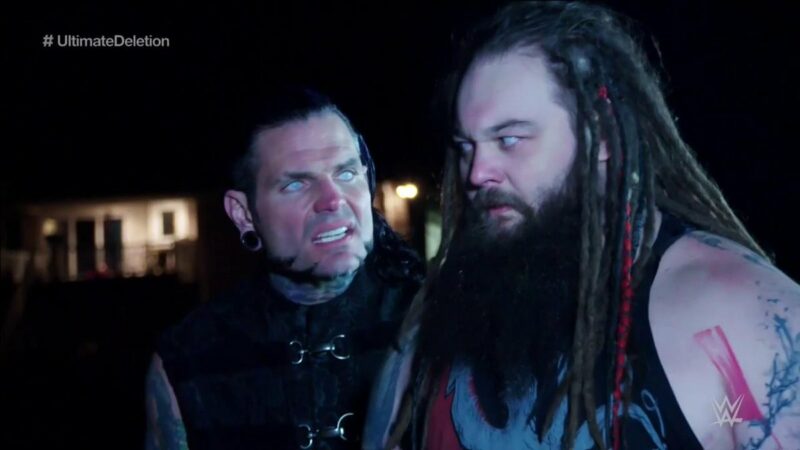 Bray Wyatt’s ‘The Fiend’ has been one of the top gimmicks introduced by the former WWE star. Now, it turns out that AEW star Jeff Hardy, who was a recent guest on the AEW Unrestricted podcast spoke about the gimmick. ‘The Charismatic Enigma’ further spoke about meeting AEW star Danhausen. The two wrestlers spoke about a potential character idea. This would be a nod to The Fiend, with Danhausen wanting to play, ‘The Friend.’


Jeff Hardy on creating ‘The Friend’:

“Me and Danhausen talked about this, his face was painted and everything,” Jeff said. “We were talking about, he said, ‘what if, I don’t know, instead of The Fiend, he came out and he was ‘The Friend.’ That’s what’s so cool about professional wrestling, so much is possible.”

Jeff Hardy then spoke about wrestling fans considering him a legend of the business. He admits that hearing those things means a lot to him. But he doesn’t feel worthy of them due to mistakes in his personal life, yet he’s pleased with how he’s come back each time:

“It’s weird, at my music shows the biggest three words, ‘you’re my childhood.’ As far as inspiration and influence, it means so the world to me, because so many people have inspired me to be the best I can possibly be. Honestly, I feel unworthy because I’ve fu**ed up so much,” he said. “But I’ve always come back, and I think that’s the coolest thing about my career, so I am a legend for fu**ing up and coming back.”

Something about Jeff Hardy’s career that has always been popular is the face paint that he does. That stems back to his time in school, which is because art is a subject that he was good at.

“That’s one thing in elementary school I always excelled in. I was very average, I was terrible at math, history, which I kind of liked, but I always excelled in art. That’s always been my thing, so I’ve been painting since, god, man, kindergarten. I remembered I painted a clown and it was so perfect. At least, I thought it was,” he joked. “That’s my biggest memory of kindergarten when I was five-year-old. But my daughters too, they’re so amazing, they’re way better than me. I’m very abstract, but I love it, that’s why I paint my face.”

Jeff is having a great time in AEW as he recently defeated Darby Allin in a Anything Goes Match on Dynamite.