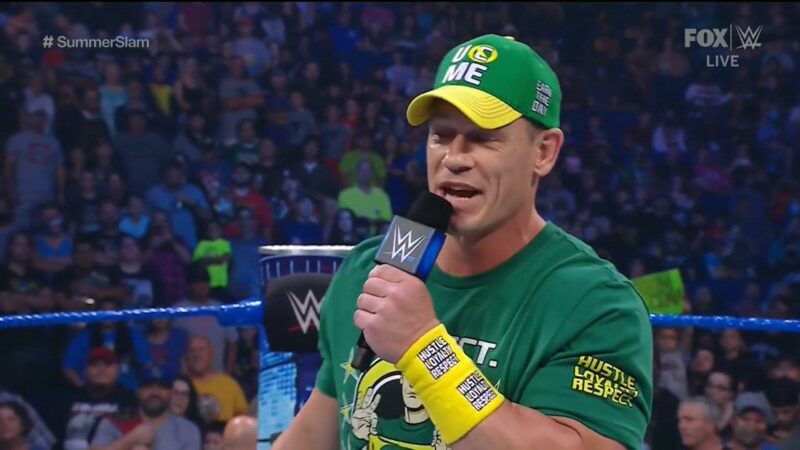 John Cena was recently finally seen on Smackdown as he was previously mainly being used in dark matches. Upon his return to the show in front of millions of fans at home, John Cena made sure to make a big statement that would not only shake up the WWE locker room, but also put some fear into the hearts of those who jumped ship to the black and gold company, AEW. Triple H ‘Blocked’ From Replacing Vince McMahon.

On the most recent episode of WWE Smackdown, we were greeted with a huge pop and standing ovation for John Cena as he made his way to the ring to ruffle up Roman Reigns with the following…. John Cena knows that School is back in session so he figured it’d be a great opportunity to give Roman Reigns his report card. John Stated that Roman is a D, a below-average D, a D-head, a D-bag, and above all, a huge D-sappointment.

Roman heads down to the ring with Paul Heyman and the two battle it out with words as Cena continues the comedy. What is most shocking between the war that the two shared over the mic was the subtle AEW hints that John Cena left for us.

In one breath, John Cena stated that Roman Reigns caused Dean Ambrose to head out of WWE. If that wasn’t big enough, John also dropped a huge CM Punk bombshell as he alluded to how he would finish off Roman: “I’m gonna take the title, jump the barricade and I may even blow you a kiss!” This is of course a direct reference to CM Punk at the end of Money In The Bank in 2011 as he blew a kiss to Vince McMahon after winning the gold, another star soon set to debut for AEW.

“I’m gonna take the title, jump the barricade and I may even blow you a kiss!” – John Cena with a reference to CM Punk at the end of #MITB in 2011. pic.twitter.com/DOhPXvDklN #WWE #Smackdown