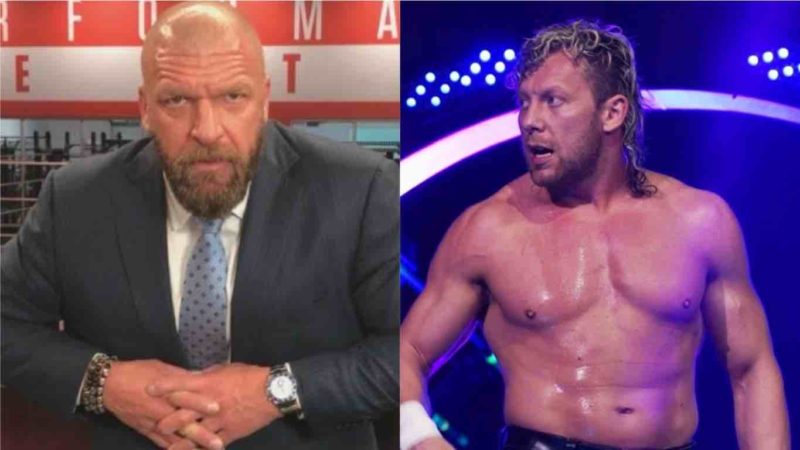 AEW World Champion Kenny Omega shot from the hip on AEW Dynamite on Wednesday, revealing why he turned down Triple H’s offer to sign with WWE. Omega made the comments to The Young Bucks during a worked shoot promo. Kenny Omega reacted to rumors that he has an AEW girlfriend a few days ago.

Cageside Seats recapped, “Kenny Omega comes out of nowhere and blasts Laredo Kid with a microphone and smashes him with the title! He takes another mic from Don Callis and says he’s having vivid flashbacks to Fyter Fest in 2019, and he asks what happened, three years ago they all had a choice, a 12-year friendship, he would have liked to call it family, and what’d he choose?

Did he stay at home with the people that loved him? Did he go to greener pastures with New York? Where did he choose? He never chose AEW, he chose the Young Bucks and the vision they created together. He chose them and they never chose him back. Sure, Don Callis can come off a little abrasive, but he’s going to give the Bucks one more chance to throw up the Too Sweet.

They walk, Kenny says they’re done, and the Lucha Brothers attack! Double stomp / package piledriver! The Good Brothers come and help Omega to his feet and he gives a weak thumbs up, bleeding from the mouth.”

Omega ended up signing with Tony Khan and AEW in early 2019 after speculation that he may be the holdout from The Elite and go to WWE, but he instead joined AEW as a Vice President. In early 2020 he became AEW Tag Team Champions with Hangman Page, and he closed out 2020 in December by defeating Jon Moxley to became AEW World Champion. Omega defeated Matt Sydal in a match to kick off Dynamite.