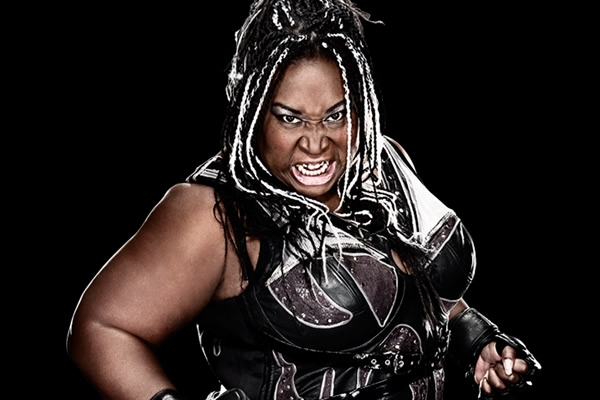 – Former WWE and TNA star Kharma joined Nani & Coach Kev for PANDEMONIUM on Wednesday night. The full interview can be heard on VOCNation.com or TheBradyHicks.com. Below are some highlights:

Upon her introduction on the show as Kharma:
“Formerly known as Kharma… [laughs] don’t want anyone at the office giving you a call. [laughs]”

If she had still been signed to WWE, would she have accepted a role on Total Divas:
“Oh yeah. I totally would have. However, I think- like you [the host, Nani] said- I’m very honest. Sometimes, I’m honest at a fault where I have to act good & edit myself. & I usually don’t because I just find that you feel better when you just live in the moment & be true to yourself. & I don’t know if they could handle me because I’m like the… for real. What’s the name… Teresa Giudice flipping tables? She ain’t got nothing on what goes on in my everyday life ’cause, you know, I go from 0 to 60 in a second if it’s warranted. If it’s warranted & it’s on… where you put on that green light where you cross the line, I’m going to put you in the place. I will turn out the whole building. People usually read about, you know, like, you guys have read a few things that I did in my past, that I’m not proud of. [laughs] But it was warranted. We all know that some people had things coming. It’s bad. [laughs] I like reality but I think, lately, reality has been not so real & I’m real & I wouldn’t do things… it would have to be for real. Real issues ’cause there’s things in issues that people need to talk about. They [viewers] would relate to them.”

Whether she regrets not being a WWE Divas Champion while she was with the WWE:
“I don’t know if ‘regret’ is the right word. I’m such a grateful person… & I think if I wasn’t such a grateful person, I would still be there. I was so grateful just to had just been there that that may have been part of the problem. I was just grateful to go through Gorilla for my very first debut & that was fine for me. That was all I asked for. I turned to my fiance & said [mocking herself], ‘All I want to do is walk down the ramp. All I want to do is walk down the Gorilla at WWE, my life is complete.’ & that’s kind of all I did [laughs]. So be careful what you ask for because you might just get it. I don’t know. ‘Regret’ is a strong word but I’m pretty confident that, had I had a longer run, I would have had that belt across my shoulder. I’m extremely confident that would’ve happened.”

The WWE Divas Championship Belt
“The butterfly belt? I’ve never told anyone this but I actually already have a belt drafted up of what my belt would look like if I were ever WWE [Divas] Champion. It’s badass. I do not care for the butterfly title & it would not go with my persona & I would insist that I have my own damn belt. I would totally push the design that I have it in my head & the vision that I have in my head because I think it would sell like hotcakes in stores. What did you say to do with it? Break it over my knee? I’m throwing it in a fire. [laughs] I’m melting it down. I would seriously melt it down & use the parts for my new belt.”

What and/or who inspired her to be a wrestler:
“So many things. Just wrestling, in general. Trish Stratus is a big final influence. Her performance, & I just watched her & her progress in the ring, made me believe I could go in there & do it, as well. So, watching her, made me go ‘Ok. I’m actually going to do something. I’m in my 20s, have a lucrative career in business. I could take my 20s & gamble with a few of these years… a few of my young years & see what I could do in my Dream Chase. I’m going to take my 20s & dream-chase with them’ & why not? That’s what your 20s are for. It was like a joke that went way too far that just kept going & going & eventually, it evolved into a really nice career. She [Trish Stratus] learned her craft. I was a big fan in the 80s, watching every Saturday with my brother, who used to torture me in the living room every Saturday morning with the Camel Clutch, which is why I incorporate it in to my repertoire sometimes. I was a big fan of the ‘Attitude Era’, of course. ‘Stone Cold’ Steve Austin… Everybody was watching WCW & I was watching WWE, WWF at the time, fanatically. That’s all I would watch. I would watch it for ‘Stone Cold’ Steve Austin, & then the Rock, & then Mick Foley. Then, next thing you know, McMahon bought WCW & it was just awesome. But it was Trish & watching her because she wasn’t that good at first. [laughs] It was kind of cringe-worthy but she got SO good, so fast… & you could just see it in each week & it was extremely inspirational.”

Does she feel that WWE not having competition (like WCW) is an issue in today’s day & age:
“I disagree. I think they have a big bar to raise to. They may have the corner in wrestling. As far as entertainment, there’s so many outlets of entertainment available today. They have a lot of competition. I mean, Youtube, itself, is competition. People carry their TVs in their pockets nowadays. Gone were the days where you had 12 channels & wrestling was featured on one of them. So, wrestling has a lot of competition nowadays to grab the attention of the viewers & the youth & to maintain the fanbase… they haven’t gotten lazy just because they have wrestling in their pockets. They still do a lot of work to keep their viewers.”

The most satisfying moment or experience in career, thus far:
“I can’t answer your question. [laughs] It’s hard to measure them because… each moment, each part of my life meant something different. You’re about to make me cry & don’t you dare [laughs]. My TNA debut… that was extremely important because I gained a lot of fame in Japan but I came home &, y’know, I wasn’t famous in America. So, debuting on TNA on American television while my mom was still alive, because she died extremely shortly after… like, barely a month after I got the belt there after I debuted. I debuted in October & she died in February so she was able to see because they smuggled her out of the hospital. She was able to see my American television debut. That was extremely important to me. Had she still lived, then I would say the Royal Rumble, of course. [laughs] Awesome experience. I mean, come on. [Nani mentions that Kharma was 1 of the only 3 females to ever enter the Royal Rumble] One of three & the first black female. I always have to say that, because, you know. [laughs] So in a few years when they do African-American history, they better put my picture up there [laughs], ‘Kharma, first African American female to participate in the Royal Rumble.'”

If she has plans on making a return to WWE:
“I think the window on that possibility is getting shorter & shorter as the months & years go by. I do have an injury that I’ve been working again… two bulging discs. I am due to get surgery real soon & shave some of that herniation off. We’ll see after that. After that, then it’s very very possible because I’ve been very transparent that WWE said, ‘Get healthy… come back… doors open’. ”

Her in-character threat to The Bella Twins during her last appearance on RAW:
“It’s awesome that everyone remembers that [how she threatened the Bellas during her last speech on RAW]. It’s always brought up to me. I would love to go back & give them their come-up-in [laughs], even though they’re face right now. But it’s not up to me, it’s actually up to you & your viewers & listeners & what you guys do. People keep asking me when am I coming back. I don’t have an answer for you. I’d be there tomorrow if I could. There are certain things, like my injury I need to take care of that. There were other things, emotional issues that needed to be dealt with. I needed some time off. I needed to be released & to address some personal issues. While one of the personal issues have been addressed, there’s still the lingering physical issue & that’s the only loose end to tie up.”

What the next chapter of her career is:
“I’m glad you asked that. Today, I launched a Kickstarter & your listeners can look it up by going to my Twitter page, @Kharma. It’s a website I’m raising money for, which tracks good deeds. If you were to do a good deed for someone & write down or stamp & you put the stamp on there, they’ll enter your serial number & say, ‘Hey, this person bought me a cup of coffee.’ You’d be able to see how far your good deed goes through my website. I hope someone buys a cup of coffee or gives someone an umbrella who needs it in the rain that turns in to a big tip for a waitress that turns into a great present for Toys For Tots, etcetera, etcetera. So I’m encouraging everyone to do good deeds & help me build the site so we can make this world a little less crappier.”

Where you can find her on social media… & MySpace:
“The Kia Stevens Project on Facebook. I have a Myspace page, even though no one is on Myspace anymore. I went on there the other night just for giggles & it was so hilarious. Totally different layout. I was like, ‘Hello! Hello! Is anyone here?’ [laughs] I think I’m going to do Myspace Mondays & try to get everyone to come back to Myspace just to kick it for every Monday. See what happens. I’m going to start a Youtube page where we’ll actually be doing good deeds that me & my team think of that people send in & that will be available through the Kia Stevens project on Facebook & my Twitter page, @Kharma. I want to be a good doer for the world. I ask myself, ‘What would I be if I wasn’t a wrestler?’ Just do good. That’s it. I want to be the ‘Johnny Appleseed of Good Deeds.’ You could find me at Shine Wrestling a lot. I will be at WrestleCade, I have a match with Lei’D Tapa. It will be epic. My fiance hates the word epic but it’s going to be epic!”

The best advice that her wrestling trainers had given her:
“When you don’t know what to do, punch them in the face.”