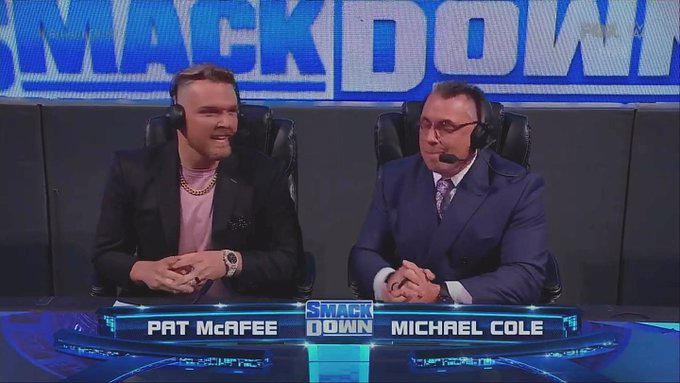 Pat McAfee made his debut as a color commentator on WWE Smackdown on FOX and it was not without it’s rough patches. Firstly, as the show went on the air, McAfee went for a handshake on which Michael Cole subsequently rejected. Also the former NXT superstar and NFL player would call a singles contest between Shayna Baszler and Natalya a ‘tag team match.’ Apollo Crews Suffered An ‘Embarrassing’ Smackdown Botch.

There was also an awkward silence during this match as McAfee would make reference to Baszler’s old MMA catchphrase where she would claim she would make opponents ‘tap, nap, snap or crap’. Which led to significant dead air between Michael Cole and McAfee, leaving Cole flustered. This top NXT name ‘ripped’ Pat McAfee back in January.

Fans the on social media platform have been reacting and discussing McAfee’s first time outing as WWE Smackdown color commentator. One member of the WWE Universe, Pako Pako said: “Gotta give credit to Pat McAfee too for being super high energy heel, can keep up with fast paced matches and build them up faster. While Paul LaCen stated: “I might be imagining it but Cole’s annoyance at Pat McAfee makes the commentary thoroughly enjoyable.”

However not everyone has been a fan as Rita Esquivel Tapia proclaimed: “I can’t believe that Pat McAfee is back in the WWE as a play-by-play commentator on the @WWESmackDown brand alongside Michael Cole!! What were they thinking when they rehired him?

Gotta give credit to Pat McAfee too for being super high energy heel, can keep up with fast paced matches and build them up faster.

I might be imagining it but Cole's annoyance at Pat McAfee makes the commentary thoroughly enjoyable. #SmackDown