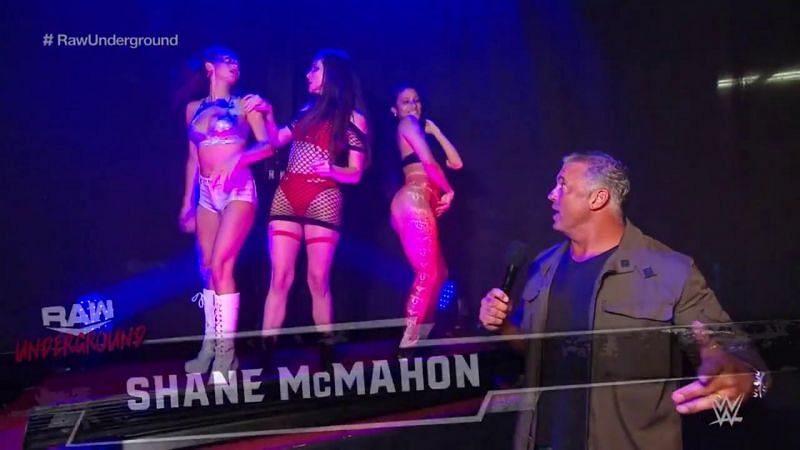 But the most important rule of WWE Underground is: Screw the rules. Shane McMahon returned to the red brand during the August 3, 2020 edition of WWE Monday Night RAW. During the show, he introduced the new Fight Club inspired project.

McMahon appeared ahead of the 10:00 EST hour, where he teased “Raw Underground”. The new project would commence at the top of the third hour. According to McMahon, two athletes would proceed to shoot grapple in a rope-less ring. While the match took place, athletes surrounding the ring were pounding the mat.

The WWE management team is desperate to increase their dismal viewership figures. The third hour of Raw has been tanking as of late. WWE is once again looking to the past to jump-start what will ultimately be another short-term boost. Stiff competition from the return of the NBA and MLB. They also fear the fans will tune out of the show. WWE’s lack of new stars was the subject of scrutiny during last week’s Q2 2020 earnings presentation.

RAW Underground, the teasers of a new faction, and various other story line decisions have been made to boost the ratings.

“The reality is that they were going to do the lowest number ever because look at the last two weeks. They had to try something different. They have been under the gun, and that investors call, and even before the investors call, they knew going in because they had a meeting, you know the writing team, and Vince had a meeting on Wednesday before the investors call, so it’s before Vince got grilled, he already had the meeting and, you know the only thing they basically came up with or agreed on was Shane McMahon would come in and do the fight thing, and Randy Orton and Ric Flair would do an angle for next week as it didn’t happen tonight, and that was it.”

“Today was complete chaos. To the point that, a lot of guys who usually don’t see things as being bad, really did as they could see how. Okay, so the whole thing is that they were just going to throw a whole bunch of stuff against the wall and hope something sticks. That’s really where we’re at right now, and that’s what tonight’s show was, throw a whole bunch of stuff on the wall and maybe find something that’s a hit.”

McMahon was last seen as a heel Commissioner of SmackDown. During that time, where he was embroiled in a long-term feud with top stars Roman Reigns and Kevin Owens. His last appearance on WWE television was during the October 4 premiere of Friday Night SmackDown on FOX. During that appearance, McMahon was “fired” by Kevin Owens.

Will RAW Underground be a long-term success? Could it help tip the scales in WWE’s favor when it comes to the ratings?