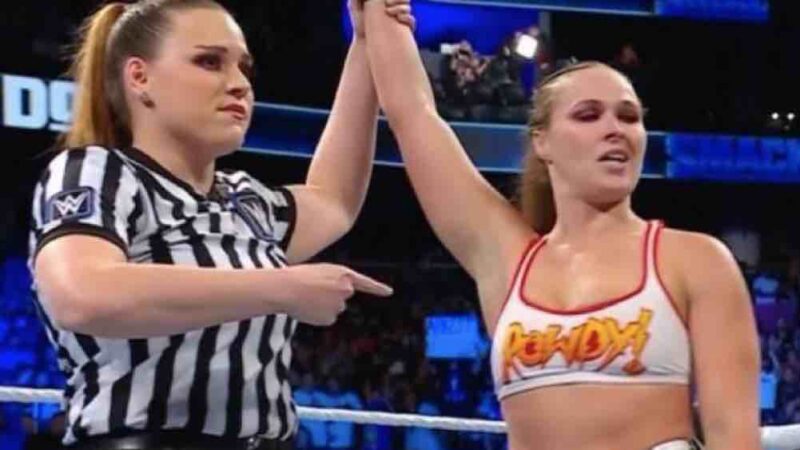 WWE superstar Ronda Rousey is on her quest to win the SmackDown Women’s Championship that she lost to Liv Morgan after the latter cashed in her Money In The Bank briefcase on Rousey. Ronda competed in a fatal five-way match involving Lacey Evans, Natalya, Xia Li, and Sonya Deville. The former champion took out her friend Natalya first after taking out the other three competitors.

The former WWE SmackDown Co-General Manager tried to one-up the former champion, but to no avail. The Baddest Woman on the planet interacted with a fan during her time outside the ring, which is now going viral.

The fan asks Ronda to get back in the ring, but Rousey says now is not the right time to get in. The interaction was brief and posted on TikTok. Rousey won the match by making the former co-general manager tap out between the ropes. She now faces The Miracle Kid for the title on the 8th of October at Extreme Rules.

The match was received well, and we need to see if Liv can outlast her opponent this time as she did with Shayna Baszler. The Queen of Spades congratulated her friend only to be reminded of what happened to her at WWE Clash at the Castle. WWE is trying to book Liv as a legit competition, and if she can defeat Ronda Rousey, then people will have to take her seriously. If that happens, then it will be her second win against a submission specialist. Liv Morgan spoke backstage on the situation and had this to say:

“I was impressed and I actually love this for me because I think we are all so used to seeing Ronda Rousey quit after she loses twice. So I think we are all in for a treat and I’m looking forward to beating her flat on the mat [one, two three]. And if anyone doubts me at this point, watch me.”

Do you agree with the champion? Sound off in the comments.