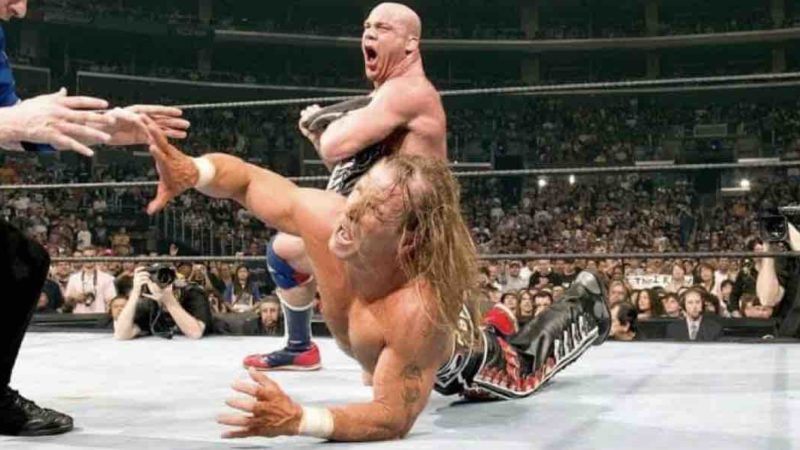 Kurt Angle sat down with Conrad Thompson on The Kurt Angle Show recently to speak about his WrestleMania 21 feud with the Heartbreak Kid Shawn Michaels. Angle also discussed his Gold Medal being stolen at a WWE show.

Michaels has always been known for being rough to anyone and everyone unless you were part of “the clique”. Let’s check in on what Kurt and Conrad have to say on this week’s episode of ‘The Kurt Angle Show’. Wrestling-Edge transcribed their comments.

Conrad: “I think Shawn approached you and said ‘I’m not scared of you!'” (Kurt begins to laugh)

Conrad: “What do you remember of that particular conversation? That seems really random.”

Kurt: “I-you know what, I was in shock, you know? The last time I really spoke to Shawn was before that. Which was Survivor series where I told him ‘Hey, you’re pretty good (Kurt laughs)‘”

Kurt continues: “He (Shawn Michaels) was like ‘Oh, thanks.'” “I didn’t know Shawn. He was out. When I started he was out with (an) injury and he didn’t come back until a couple years after.” “So, the next time I see him, he knows he’s wrestling me, he decides to come up and I guess he just wanted to tell me he’s not afraid of me.”

Kurt beings to inch forward in his chair and quotes Michael’s again: “Listen, I’m not scared of you. If it goes down, it goes down. I’m not afraid to fight you” said Michaels.

Kurt: “I was like, ‘Okay? I don’t know why you’re saying this, but alright, I respect that.'” “I think it’s because I was a shooter. I had a little bit of a reputation for being stiff in the ring. So, he was just telling me that if I take advantage of him that he’s gonna fight back.”

We would like to thank Conrad, Kurt Angle, and The Kurt Angle show for the information provided.