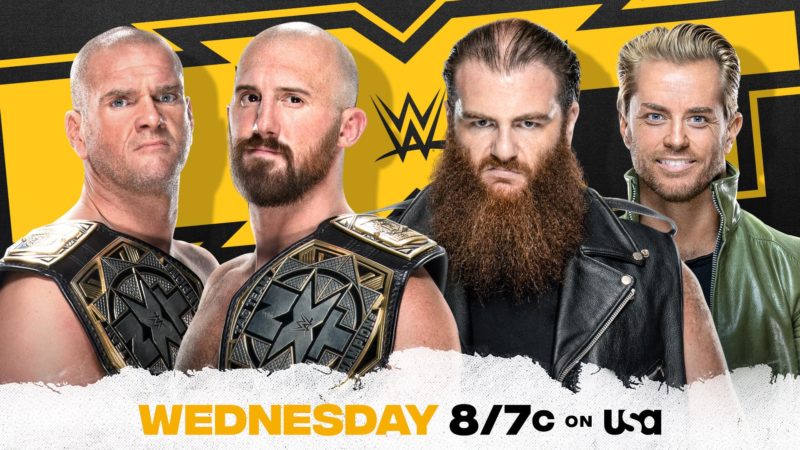 Welcome to Wrestling-Edge.com’s results for WWE NXT airing December 23, 2020. This episode features a defense of the NXT Tag Team Championships.

Wednesday nights are for (Street) FIGHTING!

As the match goes to the outside Lorcan and Burch continue to rely on their brawling prowess to overcome the size of Dain. Lorcan and Burch grab a belt and begin beating Drake Maverick to exhaustion. As Lorcan and Burch begin to celebrate, Dain tags in and attacks both champs. Drake gets ahold of the belt and begins delivering the lashings himself. He soon is hit with the cricket bat which allows Danny Burch and Oney Lorcan to hit him with an elevated DDT to win the match and retain.

Johnny is seen setting up the house and playing piano for Christmas. Indi and Austin come out with Candice to open gifts and eat cookies. They do a great job making the video look like home movies. Austin is given The Gargano Whey protein powder as a gift to become big and strong.

Swerve comes out with an incredible robe and heel energy, with a more aggressive approach toward Atlas. Tensions flare as Atlas and Swerve gradually increase their intensity toward one-another. Swerve is showing off more power this time around, with Atlas relying on his agility to endure.

Both Atlas and Swerve attempt roll-ups but it’s Swerve that gets the win and celebrates hard. After gloating, Swerve holds his hand out for a shake, but Jake refuses due to Swerve cheating.

This match is intense with Dakota Kai targeting the arm of Rhea Ripley, trying to take away the strength advantage. Ripley is able to endure using only one arm to handle Dakota Kai who also proves durable. Ripley continues to dominate and manages to put Dakota Kai in a cloverleaf before discovering Raquel Gonzalez on the stage.

The distraction allows Dakota Kai to attack Ripley, nearly getting the pin after a backstabber. Despite blocking one Riptide, Kai falls to another and gestures to Gonzalez following her win. As Gonzalez starts walking to the ring Refs come down to wave her away. The two circle and then start attacking each other to the chagrin of the referees. The Brawl continues  before it cuts to the Gargano Christmas.

Indi opens her gift which appears to be a PS5, but it turns out to be an empty box for dramatic effect. Instead her gift is to get the family nickname. They tell her “We Support You. We support Indi Wrestling.”

Way of the Warriors

Boa and Xia Li continue to get beaten down through the training in the mstery area. They seem to be enduring much better under the eye of the painted lady, no longer showing pain.

Reed very quickly dominates Adonis, using his size to brutalize Adonis and get the pin with a Tsunami splash.

Io Shirai comes to the ring to address Toni Storm’s earlier comments, but as she comes to the ring she is attacked y surprise by Mercedes Martinez. Io tries to fight back but she sends Io through the bottom of the announce table.

Johnny reveals that he went to the junk yard to find what was left of Shotzi’s tank to give the wheel to Candice as a gift. They also take a family picture to end the segment.

Thatcher is clearly perturbed and taking out his aggression on Leon Ruff. Ruff gets a few spots to use his agility to try to get the advantage on Thatcher, but it isn’t enough. Thatcher deliberately manipulates the limbs of Ruff, who refuses to give up.

Thatcher gets a steel chair and sets it on the Ramp as an invitation to Ciampa. This break is enough for Ruff to get an opportunity for some offense. Thatcher looks to have his number, but an inside cradle is all it takes for Ruff to get the 3-count, defeating Thatcher. Thatcher starts to beat down Ruff, but Ciampa runs out and delivers a draping DDT to Ciampa. He says that he’ll see Thatcher in the Fight Pit.

Rust is accompanied by Malcom Bivens, who is ringside directing his client. Rust targets the left shoulder and elbow, and finishes Daivari off with a flipping neckbreaker followed by a double armbar.

This results from Dream interrupting an Undisputed Era interview earlier in the night. Adam Cole easily able to overcome Velveteen Dream, targeting him throughout. Pete Dunne runs out and attacks Roderick Strong, delivering a Bitter End to Roddy on the apron. This allows Velveteen Dream to take advantage and attack Adam Cole using his shirt.

Cole and Dream trade control, with Dream nearly forcing Cole to hit the ref. Cole finally gets the win with a Last Shot on Velveteen Dream and signals his dominance as the show goes off the air.