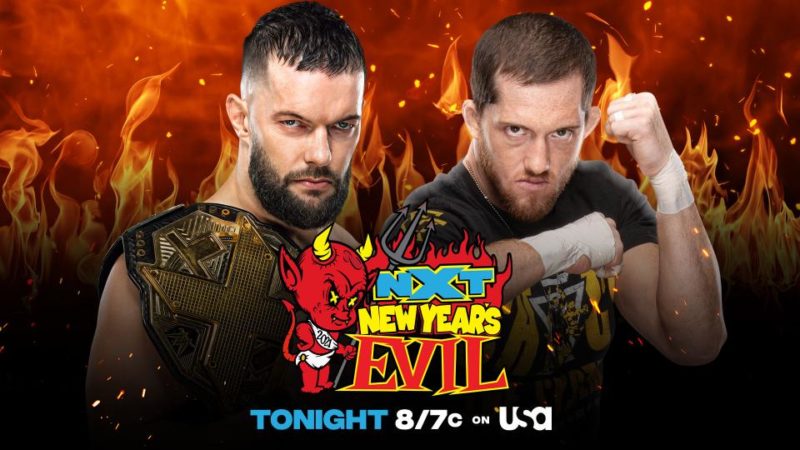 The show kicks off with Deter Lumis walking into an empty Capitol Wrestling Center. He walks up the steps, turns lights on individually, and starts the show.

The two lock-up and maintain connection as they go out of the ring and muscle their way back in. Karrion Kross unleashes brutality on Priest, who tries to play mind games with Kross by standing up to his brutality. Kross tries to pick apart Priest with targeted attacks, though Priest is able to use his length to keep Kross at a distance. Priest also has the athleticism advantage able to quickly rebound with strong attacks against Kross.

Priest endures a flurry of attacks, and mocks the ineffiency of Kross. He even gets up from a Doomsday Saito, but Kross hits him in the back of the head, knocking him out and pinning him for the win.

There are a lot of Good Lucha Things happening in this match. Escobar playing the traditional Rudo to Gran Metalik’s Tecnico.

Metalik is able to land precision attacks, but Escobar clips his wings easily with strikes and flying prowess. Legado del Fantasma try to interfere with Metalik, but Lince Dorado lauches himself onto them allowing Metalik to attempt to finish the job. Santos Escobar is able to grab Gran Metalik by the mask and give him a driver for the win.

Boa and Xia Li are shown practiciing Wushu before the commercial breal. When we return, we see what appears to be an evil empress on her throne, and she is flanked by Boa and Xia Li. Xia Li comes down and as her hat is removed she does a short wushu demonstration before entering.

Cortez tries to take on a very focused Xia Li but Xia Li is able to land quite deliberate strikes while paying tribute to her master. Xia is unaffected by pain, and lands a strong spinning kick to the head for the win.

The transformation is complete.@XiaWWE is on a completely different level right now at #NXTNYE.#WWENXT pic.twitter.com/yv9p1ZdL9D

Rhea starts on the attack against Raquel, and the match moves around the Capitol Wrestling Center before weapons come out including Kendo Sticks and Chairs. Raquel preaks a Kendo Stick on Rhea before trying to cuff her. Gonzalez gets cuffed instead to the chain link fence, and tears off part of the fence to attack Ripley with it. Raquel throws Rhea onto the Ring Bell before putting her through the table and under the chairs.

As the match continues to the back of the CWC, Gonzalez is in control until Ripley rams her through a glass door shattering it. Ripley puts Gonzalez ona catering table before delivering a flipping senton through it. The match continues back to the stage where Rhea is thrown into a glitching LED. Raquel is able to put Rhea through the floor of the stage with a powerbomb, and send her through the stage, but Rhea stays down for the 10 count while Gonzalez gets up.

The Garganos join Austin Theory and Indi Hartwell in the ring with a covered easel. Candice presents Johnny a plague celebrating his breaking of the curse. Indi and Austin present Johnny with a plaque showing them as some of the Avengers. Gargano also announces that he and Austin Theory are entering the Dusty Rhodes Tag Team Classic.

Shotzi comes out to address Candice, and as Theory tries to dress her down Shotzi fires a nerf ball into his nerf balls. KUSHIDA comes out and prevents Johnny from attacking Shotzi and the match is made by Dexter Lumis.

KUSHIDA and Shotzi are able to take on a less than prepared Johnny and Candice. The two try to use the rules of Mixed Tag in order to prevent attacks from the babyfaces. This ends up being their undoing as Kushida is able to lock back Johnny in a clutch when he nearly hits Candice.

The Mixed Tag match seems to have been a filler since the Fight Pit was no longer taking place tonight. Mr Regal announced earlier that Tim Thatcher had injured himself. In a good news announcement, however, he did announce the Women’s Dusty Rhodes Tag Team Classic. They also announce the next NXT taking place February 14th.

This match is presented Commercial-Free, The two continue more of their outstanding grappling. Finn tries to get a receipt for his jaw when O’Reilly clutches a rope with his teeth to escape a submission and Finn kicks the rope. The two continue their grueling battle with Kyle O’Reilly barely able to make a 10 count while Balor keeps his attack strong.

"You want to be a champion here at #WWENXT? THIS is what you have to put yourself through!" – @StuBennett @FinnBalor vs. @KORCombat for the #NXTChampionship is as INCREDIBLE and HARD-HITTING as ever!#NXTNYE pic.twitter.com/KeuHy6gmCa

O’Reilly continues delivering kicks to Balor, trying to make it through the pain of his Balor’s attack. Finn’s injured arm is targeted by O’Reilly and a crimson mask begins to form on Balor. Unfortunately for Kyle O’Reilly, Finn manages to catch him in a submission across the shoulders and face and is forced to tap giving Finn the win to retain.