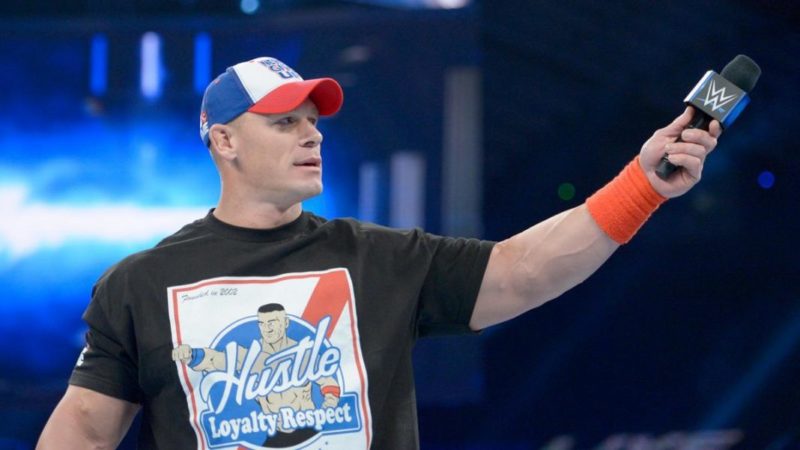 Cena has been removed from the SD Live intro.

The WWE has updated its intro for SmackDown Live and the new video package does not feature John Cena. The 16-time world champion has been a prominent part of the blue brand’s intro-video since being drafted to SD Live from RAW, but does not appear in the new vid released by WWE.

John Cena last competed in WWE at Wrestlemania 33 last month, teaming up with Nikki Bella against The Miz and Maryse. The 40-year old Superstar emerged victorious in the matchup following which he’d get down on one knee to propose marriage to Nikki Bella in front of the capacity crowd at the Citrus Bowl in Orlando, Florida.

Cena and Bella got engaged at Mania and made several mainstream social appearances since then however, the couple is on hiatus from WWE, as Nikki stepped away from in-ring competition in order to rehabilitate her injuries, whereas John is busy with his Hollywood obligations, and is presently fulfilling promotional duties of his recently released movie The Wall, besides shooting for Daddy’s Home 2. WWE had recently advertised his return for the July 4th episode of SD Live, with rumors rife that the Leader of the Cenation may, indeed, return before the Money In The Bank PPV in June. Nevertheless, for now the WWE seems to have edited out John Cena’s signature spot on the SD Live intro.

Cena is scheduled to return on July 4th at SmackDown Live, but given the struggling ratings of both brands RAW and SD Live in the post-Wrestlemania season, the WWE may be looking to bring him back sooner rather than later.

John Cena has been featured on virtually every intro-video package, to whichever brand he was assigned, since he rose to prominence in the early 2000s. Cena, much like most other WWE Superstars including Dwayne ‘The Rock’ Johnson, ‘Stone Cold’ Steve Austin, Dave Bautista and many others, seems to be drifting toward the glitz and glamour of Hollywood and has been considering his options outside WWE as of late. However, fans mustn’t worry as he’s proved time-and-again to be a man of his word, and just like he always says, is a “WWE Lifer”. The WWE Universe eagerly awaits the return to the Champ- John Cena.