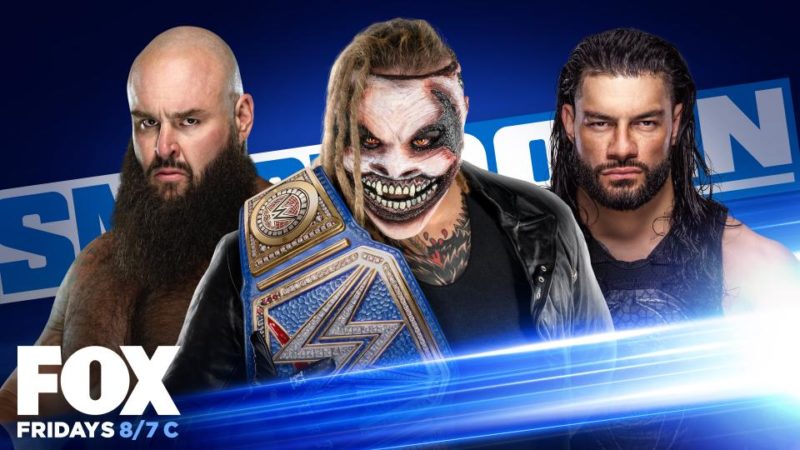 The Chairman is IN

Mr McMahon is backstage, meeting with Adam Pearce, who is nervous about Retribution. Mr McMahon decides to give Pearce a special mission, which will put him in Roman’s Path

Jeff Hardy comes out to make an announcement, but AJ Styles interrupts him. AJ complains that Jeff Hardy is making the doctors not clear him for competition, though Jeff insists he was about to make an open challenge for the title.

"YOU'RE WORKING THE SYSTEM!!"

Shinsuke answers the challenge, but AJ styles joins the commentary table.  Cesaro jumps into the picture-in-picture quite upset about Shinsuke’s sudden challenge, cutting an entertaining promo about it.

"You were basically competing against the Terminator last week." – @WWEGraves

Despite AJ loudly complaining on commentary about Jeff Hardy using the right knee, Jeff Hardy gets the win against Shinsuke.  Makes it seem like there may be some stipulation in the future regarding Jeff’s knee being used in competition.

As Jeff is going up the ramp, Sami Zayn’s music hits and it turns out he’s back! Making a fair point, he displays his title and argues that he’s never been beaten, so Jeff is a fraud while Sami is the true champion. Sami ends with a Helluva Kick to Jeff for emphasis.

Sami follows by speaking with Charli declining to explain his absence, and driving home his true intercontinental status.

Bray introduces us back to his Funhouse and his Universal championship. He has a visit from Postman Pearce (Adam Pearce in a USPS outfit), who asks him to sign the contract for the triple threat.

"I just signed a couple of death warrants!"

Matt Riddle comes out to the ring and challenges King Corbin to face him, however as King Corbin responds Shorty G attacks Riddle from behind. The match is brief and Shorty G is defeated with Bro Derek. Riddle also fends off a surprise attack post-match by Corbin.

Following this Corbin accepts the challenge at Payback to face Matt Riddle one-on-one.

Bayley approaches Big E backstage while he is getting ready to team with Heavy Machinery later in th enight.  She unintentionally throws shade at Sasha by saying that some people can only handle a Tag Team championship as they head to the ring.

Bayley comes out to address the situation for the tag team championships. However, in the process she continuously roasts Sasha’s inability to successfully defend her title. Nia and Shayna interrupt on the big screen and prevent a blow-up from Sasha by refocusing the situation.

"I am @SashaBanksWWE. I know what I want and when I want it… and come this Sunday at #WWEPayback, I WILL get my vengeance!" #NiaJax & @QoSBaszler's taunts won't work on The Bo$$. #SmackDown @itsBayleyWWE pic.twitter.com/JWl9aIkkPZ

For some strange reason Drew Gulak decides to hit Braun Strowman with a chair in catering, and following a no-sell he tells Pearce he’ll sign the contract if he gets a one-on-one match with Gulak.  He makes quick work of Gulak and signs the contract following the win.

Cesaro and Shinsuke discuss the importance of supporting each other in their tag team, but Lucha House Party have a little dissention in the ranks.  While Kalisto says he learned from Lince’s mistake and asks he and Gran Metalik to stay backstage and watch how it’s done. As Kalisto leaves, Shinsuke and Cesaro attack his partners.

There are a lot of action between the two competitors, showing Kalisto as quite competent against Cesaro.  They also take a lot of opportunities to put him over as a former United States Champion.  Unfortunately when Shinsuke tries to get involved, Lucha House Party come out to make the save and instead cause a distraction that gets Kalisto pinned.

Nikki Cross is reminiscing about the first mug that Alexa Bliss ever got her with Tamina backstage, when Alexa shows up.  She is suddenly wearing her hair in pigtails again, and it looks like she’s starting to put in dreads. Nikki voices her concern, but Alexa freaks out and smashes the mug while calling off their friendship to a distraught Nikki Cross who is reminded of The Fiend.

Prior to the match, there is a strategy meeting between the heels where Morrison puts forth the brilliant idea of preventing all men from entering the ring.

Heavy Machinery and Big E excellently use their size to dominate, but some confusion is caused when Sheamus goes outside to ring the bell.  Through the match, Sheamus gets continuously frustrated, eventually abandoning his partners and allowing Big E to pick up the pin.

Roman Reigns is telling Adam Pearce that he will be victorious at Payback in reclaiming his championship.  When they pull back we see that Roman is now a Paul Heyman Guy!