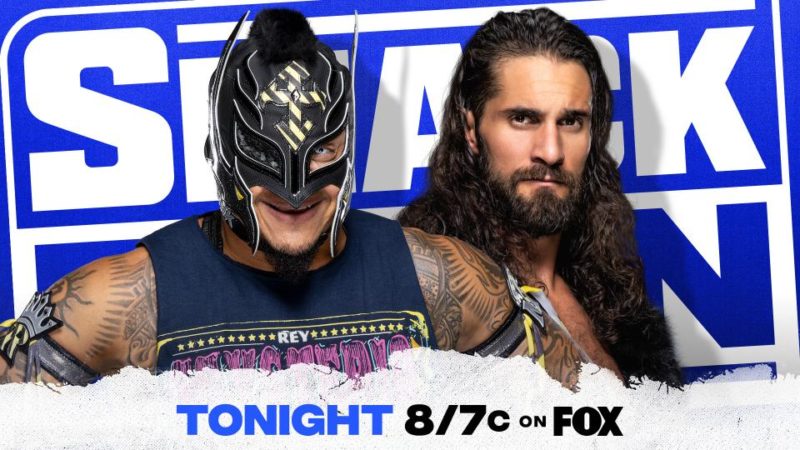 Welcome to the results for WWE Friday NIght SmackDown airing November 13, 2020. This episode alleges to bring an end to the Rey and Seth saga.

Roman Reigns opens the show flanked by Special Counsel Paul Heyman. He extolls his virtues as the top champion on SmackDown, talking about how he’s making everybody else better. As he starts talking about his faceoff with Randy Orton he is interrupted by Drew McIntyre.

"I don't watch RAW. It's all good, nobody does. Nobody is watching that show because they are all watching SmackDown." – @WWERomanReigns to @DMcIntyreWWE

Jey Uso runs out and offers to take Drew on tonight for being so disrespectful. After we come back from commercial Roman is confronting Jey backstage for acting as though he had power on SmackDown instead of Roman running the show.

Sami cuts a promo before the show talking about how many obstacles he’s had to face as a returning Champion. Apollo Crews is able to easily overpower Sami Zayn and comes close to winning a few times, but on the outside Sami Zayn ties up Apollo’s leg in the canvas ties and wins via count out.

Sasha comes out to celebrate retaining her SmackDown Women’s Championship, and begins calling out Carmella. Bayley interrupts and makes her way down the Ramp but Carmella turns out to be ambushing Sasha, delivering a superkick to the Champ.

Robert Roode is ringside with Dolph, though this match comes about since Dolph and Roode interrupted his dinner in catering. Otis is able to easily use his power against Dolph, but Roode allows Dolph  to land a Zig Zag on Otis. It isn’t enough though as Otis kicks out managing to hit a Caterpillar and Splash for the win. He’s able to scare off Roode as well, preventing an underhanded attack.

After the match, Chad Gable approaches Otis about joining his new “Alpha Academy” to allow him to unleash his inner Alpha and become a better wrestler. This looks like it’s leading to a new form of Thatch as Thatch Can.

This is supposed to be the final conflict between Rey and Seth. Murphy accompanies Seth to the ring while Rey is joined by his entire family. Rey starts as the aggressor though Seth quickly balances the power. Great fighting on the outside despite a lack of weaponry being used as well as a lack of assistance by their seconds. Rey is suplexed onto the announce desk though it doesn’t break and the match continues.

Despite the billing of no Holds Barred it appears there are No Holds Utilized in this match, with constant action remaining grounded in traditional wrestling. Seth finally uses a weapon and slams rey with the steel steps before setting them up to Stomp Rey onto. Rey turns the tides and sets up Seth on the steps giving a baseball splash to. We get back into the ring and the two are battling over putting each other through a Table with Seth being successful. Rey manages to kick out and as Seth tries to brutalize him Dominick makes the save. He’s met with a Superkick and Murphy stands aside before rushing in and handing Seth a Chair. Murphy attacks Seth with a Knee and rushes outside and Rey misses an initial 619 but recovers and hits one and a Frog Splash to get the win.

Do the right thing, @WWE_Murphy!@WWERollins was just BETRAYED by his disciple on #SmackDown! pic.twitter.com/VrXeFjhgbq

After the match Rey beckons Murphy in the Ring and gives him his approval with a handshake before Aalyah runs up to Murphy embracing him and letting the family accept him in turn.

A triumphant night for the Mysterio family & @WWE_Murphy!

What a way to end the final chapter on #SmackDown! pic.twitter.com/7gI8XW0be8

Tamina vs Liv Morgan vs Natalya vs Chelsea Green

Prior to the match, Natalya is complaining to Adam Pearce about not being in the Survivor Series match, but he does say there’s a Triple Threat for an opening on the team. Chelsea Green makes an appearance in the office and is added to the match just prior, making it a fatal four way. The women battle with the main story being the aggression of Natalya as well as the debut of Chelsea Greene. Liv gets the win with facebusters on both Natalya and Tamina.

Street Profits try to apologize to Big E by bringing him some freshly made food, but it’s shaped like Ls since they believe that will be what The New Day receive at Survivor Series. Big E then rails against them as a New Day knock-off.

It's ON at #SurvivorSeries! pic.twitter.com/UnBKQqU1m9

This match is under Unsanctioned status so WWE officials don’t have to be responsible for what occurs. Drew starts off strong in the match, but Jay is easily holding his own against the former champion. McIntyre has the clear strength advantage but the toughness of Uso is on full display as he survives everything Drew throws his way. He even shows intelligence by leaving the ring as Drew prepares a Claymore.

Roman’s music hits and he starts making his way to the ring which Jey uses to take advantage of Drew and send him into the ring. Jey says he can beat him but Roman says he doesn’t care if he beats him as long as he makes him understand. Jey starts to unload fists onto Drew but when he gets up he eats a Claymore to end up pinned.

I don't care if you beat him. Make him understand." – @WWERomaReigns to Jey @WWEUsos #SmackDown pic.twitter.com/SOvJnjH4ZV

Drew rolls out of the ring and asks Roman if he understands and Roman tells him to get himself a championship and they’ll talk.