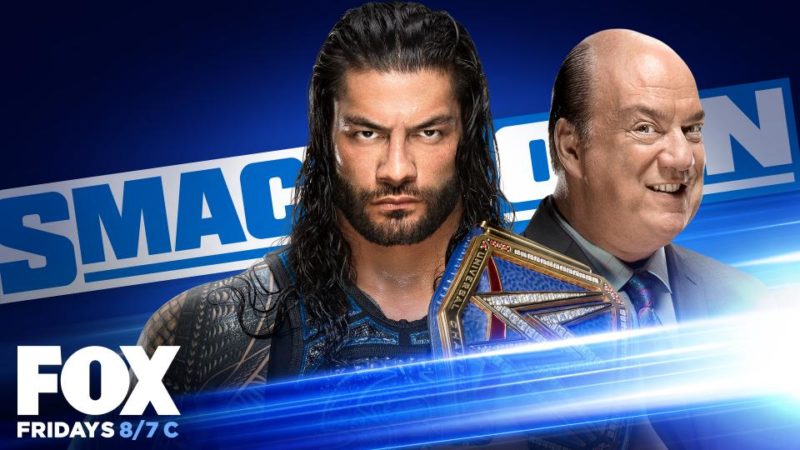 Welcome, Wrestling Edge! It’s time for SmackDown on Fox fresh off of the back of Payback.

Roman Reigns comes out to the ring flanked by Paul Heyman. Heyman says that he was brought back and corrupted by Reigns. What follows is a passionate promo about how unappreciative the WWE Universe was during Reigns’ absence. He rebrands himself as Special Counsel to Roman Reigns. Roman rebrands himself as Tribal Chief of his island.

Backstage Roman meets up with his cousin Jey Uso, who could possibly be teasing the long-rumored Bloodline faction.

The match is pretty straightforward, with Heavy Machinery playing the role of power babyface. The attempts to single out Tucker don’t go well for Miz and Morrison, but Otis is able to get the win for his team and debut a new move in the Vader Bomb. After the match John Morrison steals the Money in the Bank Briefcase, so we’ll probably get a story going forward about this abscondment.

Big E is getting ready for the return and birthday celebration of Xavier Woods, but when a security guard comes to announce Woods is back Sheamus attacks.

WHAT JUST HAPPENED?!?@WWEBigE was ready to welcome the birthday boy @XavierWoodsPhD to #SmackDown but got ambushed by @WWESheamus instead! pic.twitter.com/P6bswAFzmQ

When we come back from commercial, Sheamus claims that there is misinformation and he was merely defending himself. After a lengthy promo he voices that the main event fatal four-way, may become a triple threat. It is later confirmed by Adam Pearce that the match will still be a fatal four way with a mystery opponent.

BREAKING NEWS:@WWEBigE will not compete in tonight's Fatal 4-Way and another Superstar, yet to be announced, will replace him. #SmackDown pic.twitter.com/ASDBUk8X8G

Before the match, Banks and Bayley are interviewed about their desire for the titles, emphasizing the desparation to win.

Shayna and Nia immediately use their power to dominate Banks and Bayley.  Throughout the match Bayley and Banks are clearly the team with the better tandem teamwork.

A lot of the main action features interactions between Shayna and Sasha, with Sasha’s injured knees being frequently targeted with both strikes and submissions. After a valiant effort that sees Bayley and Banks on the cusp of victory, a surprise crossbody by Nia Jax allows her to pin both women for the win.

When we come back from commercial, the EMTs are checking on Sasha, but Bayley has had enough and starts to beat down Sasha. Bayley has now officially turned on Sasha. The beatdown continues for several minutes, with the result being Sasha left lying in the ring before being taken to a local medical facility on an ambulance.

Sami Zayn comes out to address his status as Intercontinental Championship. After getting upset at both Greg Hamilton and the production truck, Jeff hardy cuts off Sami declaring that if he wants a match he only needs to ask.  AJ Styles also comes to the ring naming himself the Uncrowned Intercontinental Champion. After a scuffle only Sami is able ot walk out under his own power.

Seriously, I have no idea who they’re teasing with this video package.

There is also a Firefly Fun House tease of a brand new friend coming. We suddenly see Nikki Cross watching a screen with concern, and Alexa Bliss hugging her while Ramblin’ Rabbit is in the background.

Who is coming to the Firefly Fun House? #SmackDown pic.twitter.com/uvjDQFBhEM

Jey Uso is added to the match last minute since Big E was stretchered out earlier in the night. Roman challenges Jey to go get this win on his own.

"I know your brother would win. Let's see if you can get one on your own this time." – @WWERomanReigns to Jey @WWEUsos #SmackDown pic.twitter.com/FQkP5lIzMX

There’s some early interplay between Sheamus and Matt Riddle which makes me think they would have a great program together. There is non-stop action throughout the match, maintaining pace perfectly. The final sequence saw Corbin get a Brogue kick and Floaty Bro while Sheamus got a Bro to Sleep but it was Jey who won with a splash and welcomed Roman to the Uso Penitentiary.  It’s going to be cousin vs cousin at Clash of Champions.

"Hey Big Dog, I made the family proud too!" – Jey @WWEUsos #SmackDown pic.twitter.com/FfbFd1CmRD