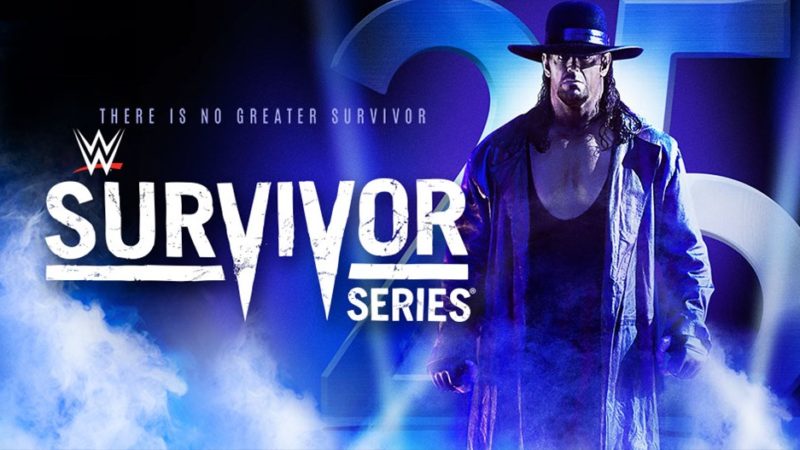 Welcome to Wrestling-Edge.com’s coverage of WWE Survivor Series 2020. The Brands battle for supremacy in every match on this show tonight, including the traditional Survivor Series elimination match.

Jey Uso and AJ Styles start the Survivor Series elimination match. They show Paul Heyman watching backstage very carefully. Match participants cycle and we get some entertainment from Otis vs Riddle. Seth Rollins then enters the match only to offer himself up as a sacrifice  for a Brogue Kick to be eliminated.

As Team SmackDown chastises Seth, Braun runs through the entire team. More conflict ensues between big men as Keith and Otis brawl. Strowman enters after and continues to beat down Otis. Kevin Owens comes to the rescue delivering stunners to much of Team Raw, but AJ Styles eliminates him with a Phenomenal Forearm.

King Corbin tries to eliminate AJ with an End of Days, but the rest of Team Raw breaks up the pin. Riddle is able to eliminate Corbin with a Floaty Bro, giving Raw a 5-3 advantage.

Jey fires up trying to fend off members of Team Raw, but is beaten down by Sheamus. Otis tags in and easily clears Riddle before battling against Braun Strowman. Strowman pulls off an impressive feat of strength giving Otis a powerslam for another elimination.

As the last remaining member of Team SmackDown, Jey Uso is throwing superkicks everywhere. Jey is nearly able to eliminate AJ Styles, but a blind tag form Keith Lee allows him to get in and deliver a Spirit Bomb to Jey to make it a clean sweep for Raw against Team SmackDown.

Later that night, Roman chastises Jey for his loss, telling him the roster doesn’t fear Jey, therefore they don’t respect Roman or their family. He claims he is tired of dealing with losers and sends Jey home for the night.

The New Day vs Street Profits

The New Day come out with Gears of War cosplay. Franchesca is also fused with a lancer.

The match itself begins very athletically, neither team having a clear advantage over the other. When the mathc goes to the outside of the ring New Day take control with well aimed dives. New Day begin targeting the abdomen of Montez Ford, isolating him and forcing his effort to be a complete struggle.

Montez is finally able to tag in Dawkins, allowing Montez to recover and the two are able to attack with the athleticism they’re known for. Ford pulls off a Frog Splash, but because of the attacks on his core he is unable to survive delivering a splash to Kofi and the New Day endure. Montez Ford even steals Kofi’s finisher but a legal Xavier Woods keeps the aggression on Ford.

Dawkins makes a blind tag during Woods’ attack, allowing Ford to hit a blockbuster Doomsday Device and Dawkins pins Woods for the win after an incredible match.

Sami tries to avoid Bobby Lashley in the beginning of the match, running to the ropes every chance he can get. Once Lashley gets ahold of Sami, he has a clear strength advantage and doesn’t even need the help of The Hurt Business surrounding the ring.

Sami tries to claim Vertigo and attempts to roll up Lashley,  The Hurt Business is on the outside to keep Zayn honest as he tries various antics to win including removing a Turnbuckle. When Sami tries to escape he trips over MVP’s foot and as he tries to complain to a ref Lashley catches him in a Hurt Lock earning the win by submission.

The beginning of the match is an exhibition of technique for both women, staying within grappling range of each other. It devolves into a strike competition, though Sasha is able to expertly reverse Asuka’s attacks. Intensity increases on the apron, with the champs keeping the attack going near the barrier nearly causing a double count-out.

From the ring to the barricade to the floor, @WWEAsuka and @SashaBanksWWE are giving it their all at #SurvivorSeries! pic.twitter.com/gCo6oLuPMn

Sasha learns from previous attacks and turns her block of top-rope offense into a Banks Statement. Asuka nearly turns it into an Asuka Lock but with Sasha trying to escape she turns it into a lungblower. an Impressive chain of reversals ends with Sasha getting the win.

The Gobbledygooker is backstage celebrating the 24/7 title win, when a trail of birdseed ends up being a trap for Akira Tozawa to capture the championship. Immediately after the win R Truth attacks him with a bag of seed and reclaims his title.

Bayley starts the match with Lacey Evans, and the teams are fairly balanced throughout with even Lana getting a chance to perform due to blind tag, but quickly being sent to the stairs by Shayna and Nia dejected.

The match descends into chaos though Nia is able to clear out most of Team SmackDown before getting removed by Bayley. With all the women on the outside, Lana is still watching from the steps as a superplex wipes out the rest of the field. Peyton Royce hits a Deja Vu on Bayley to eliminate Smackdown’s Captain first.

Peyton Royce continues to have incredible offense, but it isn’t enough as Natalya locks in a Sharpshooter to even the odds at 4-4 by eliminating her.

Lacey Evans tries to get revenge for her teammate by attacking Natalya and it seems that Natalya may treat her the same way. Thanks to a distraction by Baszler, Lacey hits a Woman’s Right to eliminate Natalya.

Bianca gets in to take advantage of the situation, but is nearly eliminated when Lacey Evans nails a Spanish Fly. The pin is broken up by the Riott Squad who then use tandem offense against Nia Jax. Constant Tags between the two allow them to essentially keep the attack 2-on-1. Shayna gets in and hits a Kirafuta Clutch on Ruby, but Ruby is able to roll through but since the Ref is distracted she doesn’t get the pin and instead passes out and is eliminated. The match is now 4-2 with Raw on the advantage.

Liv Morgan maintains an assault on Lacey Evans, and despite being able to eliminate Lacey with a Crucifix Bomb Nia and Shayna are still focused on keeping Lana out of the match. Liv is constantly attacking, but Nia eliminates her with a Samoan Drop. Bianca is the last member of Team Smackdown Remaining.

Bianca manages to keep  pressure on Nia, though when Shayna gets a Kirafuta Clutch on her she manages to get her arm on the rope before passing out. Shayna keeps the lock on and gets disqualified, and Nia tries to put Bianca through the table. Bianca battles Nia on the outside, causing both to be Counted Out leaving Lana as the Sole Survivor for Team Raw.

The two lock into close-quarter combat. Each move deliberate and Drew seems to have the upper hand on Roman. Once Roman finds his bearings, he continues to reset the ref’s count while picking apart Drew on the outside.

Roman’s goal seems to be punishing Drew opposed to just winning, and every time Drew manages to catch him he endures the punishment. The two men have moments of brilliance against one-another, absorbing damage and taking time to recover as they feel the brutality. Drew hits a surprising body-scissors kimura submission that Roman manages to get to the ropes on, and Roman sends McIntyre through the announce desk with a pair of Samoan Drops.

Roman continues to avoid a count-out victory, but it works against him as Drew manages to kick out of Spears and Superman Punches. Drew lands a Claymore on Roman, but the Ref is also knocked out, so he’s unable to get the win. Despite a valiant effort from Drew, Roman gets the win by choking him out with a guillotine.

After the match, Jey is waiting for Roman at the top of the Ramp and the two seem to reconcile as they embrace and Roman lifts his title.

Shane McMahon, Big Show, JBL, Jeff Hardy, Mick Foley, The Godfather, The Godwins, Savio Vega, Rikishi, Kevin Nash, Booker T, Shawn Michaels, Ric Flair, Triple H, and Kane all come out to the ring to bid Farewell to Undertaker. I’m curious if they ribbed Kane because he’s the only person that comes out to the ring in full gear, while everybody else is in a suit or casual clothes.

They play a video package recapping the career of Undertaker and when they return Vince Mcmahon is standing in the center of the ring talking about the last 30 years of the Undertaker. After his words he introduces Undertaker who enters with his theme played Tesla Coil style before his true theme plays.

Undertaker stands in the middle of the ring as the Thunderdome plays the sounds of a chanting crowd. He says that he’s made that slow walk for the last 30 years but it’s time for him to let The Undertaker rest in peace. He kneels and briefly summons a Paul Bearer hologram, before the spotlight fades to just him as he kneels. The lights come back up and he makes his way back up the ramp as he summons lightning one last time. The Production logo goes up as he makes his way to the back.