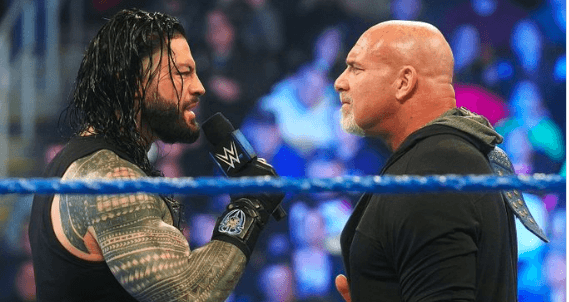 Goldberg was going to square off against Roman Reigns at WrestleMania 36. However, due to the COVID-19 outbreak, that changed. Reigns had to pull out of the match in order to avoid risks to his health.

Goldberg spoke to Carcast, where he said he did not blame Reigns for not competing at the show of shows. He did not understand why Roman was even considered to be in the match after the outbreak started. WWE kept on building hype for the match, including focusing on their shared football backgrounds. He revealed that they tried to tape the match separately, but to no avail.

“You know, obviously, I had a change of opponents at the very last moment. You know, Roman Reigns, everybody knows he has leukemia. You know, he’s in remission and his — obviously his immune system is down. And so, I don’t know why it was even considered in the beginning, except for the fact that we’d invested time and WWE invested the money in the angle, in the match, you know. So literally until the 23rd hour, it was still a possibility that he and I were going to wrestle. So plans kind of changed at the very last minute.”

“I did my match with Braun. and it was possible that I could do a match with Roman again before the fifth [the night the match aired]. That obviously fell through.”

Braun Strowman took his place in the match and won the Universal Title. It seems Bray Wyatt will be challenging him for the title now. We will have to see how WWE books Braun Strowman’s title run.