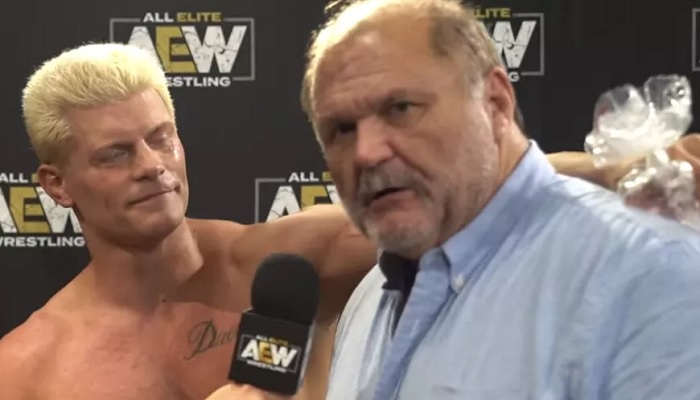 “The Enforcer” Arn Anderson told the full story behind Cody Rhodes contacting him to join All Elite Wrestling when he parted ways with WWE in 2019 during a recent episode of his podcast, “The Arn Show.”

The AEW coach and on-air manager of the reigning TNT Champion “The American Nightmare” also spoke with his podcast co-host Conrad Thompson about how Vince McMahon will be viewed in the future, wanting to be known as an elite worker in the pro wrestling industry and more.

Featured below are some of the highlights of “ARN 46: ASK ARN ANYTHING 21,” the latest installment of the official podcast of Arn Anderson. For even more highlights from the podcast, check out Shuriken’s article here at Wrestling-Edge.com where “Double A” explains why WWE has short televised matches.

On how Vince McMahon will be perceived in the future:

“Well, it depends on what seat you’re looking at. Are you looking at it from a fan seat or you’re looking from a wrestler’s seat? It just depends on your view. Did he revolutionize the business as far as expanding it to having children, and females, and hoards of them as fans, and, you know, all the marketing, the marketing genius that he is? Yes. Did he take the one product that those of us as wrestlers put above everything else, the holy grail? The reason we all want to do this as children is the wrestling part.”

On wanting to be known as an elite worker:

On Cody contacting him to join AEW after he parted ways with WWE in 2019:

“Cody got a hold of me. I was just going to kind of wander off into personal appearances, and Comic Cons, and have Tony Hunter book me around the world for however long I felt like I wanted to do anything, and then I was just gonna go home and hang out. And he got a hold of me. He says, ‘hey! we got some exciting stuff going on here. I would love for you to be a part of it. I think you can bring a lot to the table. It’s going to be kind of a different concept. You would be with me as my head coach.’ And I had to think about that one for a second. Just going about through history, and the history I have with the family and me always being the antagonist to his brother and his father, and I went, ‘that’s an interesting concept’. I love to apply myself and get creative again. ‘[Let’s] see if we can make this work.”

For the full episode of The Arn Show podcast featuring pro wrestling legend and AEW star Arn Anderson, check out the YouTube video embedded below, or visit the official Stitcher podcast page.