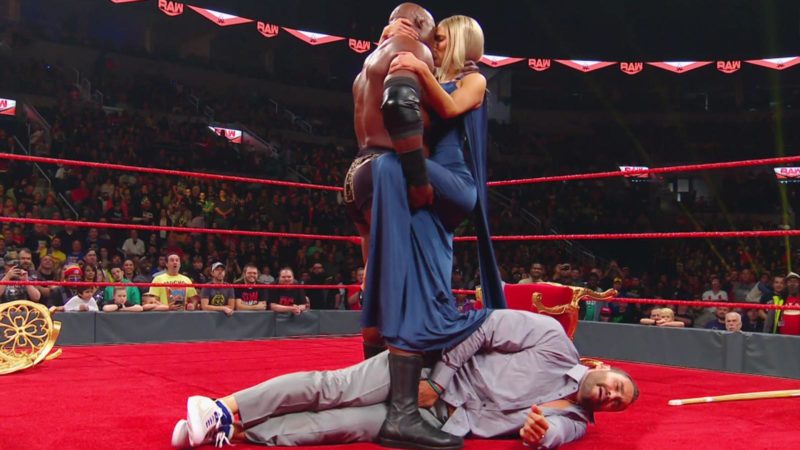 The Hurt Business member and former WWE United States Champion, Bobby Lashley was recently interviewed by SportingNews. During the interview ‘The Almighty’ discussed one of the most infamous wrestling angles within the last year and and half – his love triangle with ‘The Ravishing Russian’ Lana and former WWE superstar – Rusev. Lashley and although the angle has since fizzled, Lashley recollected on it with the following quote. This Bobby Lashley Vs. The Miz WWE Spoiler recently leaked.

It happened so quick. When I was introduced to it, I was told what to do and … (groans). I didn’t understand the magnitude of it. But the one thing I did know was that I was doing something different. And you can say whatever you want about Lana but she was 100 percent committed and invested in that character. I felt awkward doing it. I’m always in fight mode but it was good to pull me out of that mode. But I needed to relax and just have fun with it. I loosened up because I knew we were trying to entertain people. I understood that, even though I didn’t originally like the idea and ended up being cool with it. It’s not comfortable for me but I understood the lesson I was being taught.

In other news regarding Bobby Lashley, the aforementioned Lana discussed the angle in detail as well in a seperate interview with TalkSPORT, she stated how romance angles in sports entertainment and important and vital while also celebrating that she and Lashley ‘broke the internet’ with the storyline. She stated the following quote.

“I think we broke the internet and cracked mainstream media. A bigger thing that I think is very important to have on WWE television, and I know a lot of people might disagree with me, is I do think it’s important to have romantic angle, relationship angles, soap opera angles. We have so much WWE programming every week. What is it, nearly 10 hours of network television? It can’t all be for the title. It can’t just be about being an in-ring competitor, it’s got to be about relationships stuff as well.” Lashley’s rumored WWE title win was just revealed.

Credit to SportingNews and TalkSPORT for the quotes.