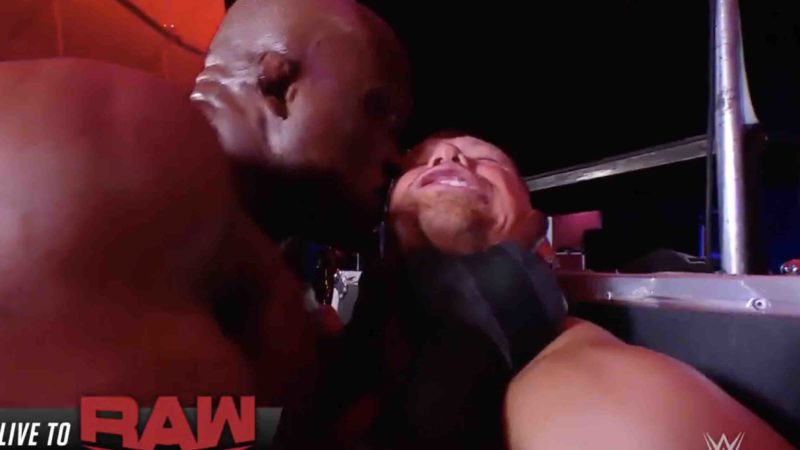 Bruce Prichard’s WWE title ‘bait and switch’ tactics angered fans on Raw, though Bobby Lashley did eventually beat The Miz to win the WWE Title. Managing Editor of Wrestling Inc. Nick Hausman took to social media via Twitter to voice his displeasure over tonight’s edition of WWE Monday Night Raw and the current WWE Championship title picture. A WWE title match between champion The Miz and number one contender and The Hurt Business member Bobby Lashley was scheduled to take place this evening to start the show. A WWE Raw title match led to a reported ‘concussion.’

However, that match was pushed back to ten o’clock eastern standard time when The Miz said he was sick. This lead to early speculation from fans that The Miz might not in fact defend his championship tonight due to WWE pulling bait and switch tatics in the past. Bobby Lashley ‘demanded’ WWE bring back a fired star.

Hausman wrote on Twitter: “I wonder how many people just bait and switched the channel.”

Members of the WWE universe took to Twitter to respond to the bait and switch that took place tonight as a desperate ratings ploy, though it may have backfired. One fan by the name of Kaleb Cenite wrote: “I was pissed. If Miz doesn’t defend the belt tonight then he needs to be stripped of it. Lashley deserves this and not to be fucked over in wait one more week booking shit.” While MikeM3425 stated: “I’m not mad about The Miz. We all usually feel that way after watching the first hour of #WWERaw.”

The Miz then failed to have a match, running away from Lashley leading to a countout. Shane McMahon then threatened to strip Miz of the title backstage when MVP and Lashley ranted.

Lashley and Miz later squared off, with Shane McMahon calling out lumberjacks. Lashley won the title in dominant fashion.

The Miz taps out to the hurt lock. Bobby Lashley is WWE Champion! #WWERAW pic.twitter.com/WmSKwSlehF

The Miz taps out to the hurt lock. Bobby Lashley is WWE Champion! #WWERAW pic.twitter.com/WmSKwSlehF