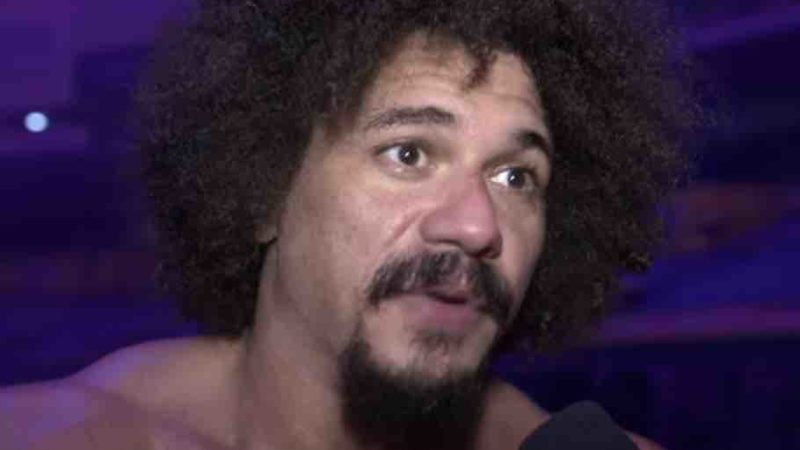 Over on the SquaredCircle subreddit, one user of the popular professional wrestling discussion board by the name of doctor-doodoo posted an interview that took place on a revenant sports entertainment podcast which former WWE superstar was a guest on. During the podcast, Carlito confirmed that his surprise return with WWE, which took place at the 2021 edition of the Royal Rumble and the following week on Raw was ‘one off’ and is interested in going to AEW, if not returning to WWE. The user documented the exchange with the following post. Carlito recently made this bold WWE drug test remarks.

“Carlito was interviewed this past Friday where he confirmed the Rumble and Raw return was a one-off and he’s now on his own. He said he’s open to returning to WWE in the future or going to AEW but he’s not under contract anywhere. This explains why he wasn’t on Raw the past two weeks despite reports that they were going to give him a 3-week tryout. I’m pretty bummed out about this. He looked great in the ring and appeared to be in the best shape of his life so I was really hoping he’d get signed to a new deal. If WWE doesn’t want him then hopefully AEW capitalizes on the hype he brought to Raw and signs him up instead.”

Fans and members of the WWE Universe responded to the news over on the subreddit. One by the username of Protacrastic stated: “Shame, but at least he got to help end Jeff Hardy’s losing streak by tagging with him to beat the imposing team of… Elias & Jackson Ryker. It was cool to see Carlito back in the Rumble, shame he didn’t get a producer gig like MVP last year, but WWE’s roster is already bloated as is, and adding another 40 year old veteran isn’t really something they need to be doing.” Carlito also revealed not too long ago the worst part of his WWE return.