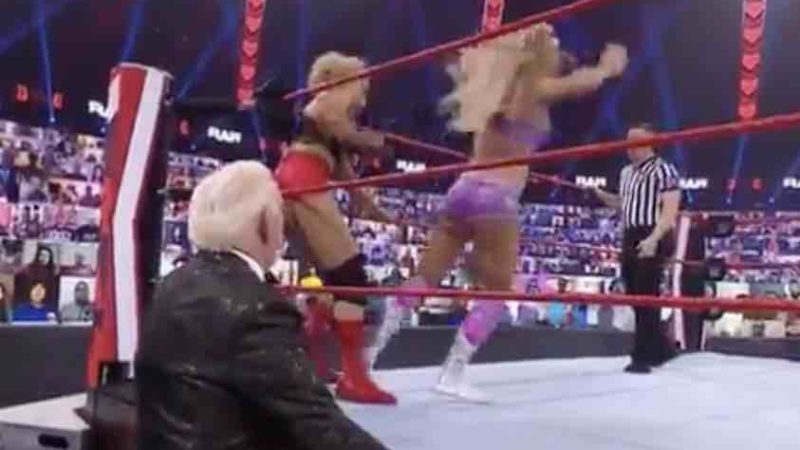 Charlotte Flair and Lacey Evans are two of the best in the business, but even they can botch! A member of the WWE universe took to social media via Twitter point out a key problem with this week’s Lacey Evans vs Charlotte Flair match that took place on Monday Night Raw. The Twitter user and WWE fan known as Dick Van Klondike revealed how Charlotte and Lacey botched by seemingly pressing pause mid-match and just stopping during a kick attempt as Evans was in the corner. Lacey Evans used ‘Toy’ for Ric Flair in recent video

This led Evans to react on the fly, slap Charlotte and attempt the move yet again, which was ultimately successful. You can see the event in question below.

In other news regarding Lacey Evans, Charlotte Flair’s legendary father, ‘The Dirtiest Player in the Game’ and Hall of Famer, Ric Flair revealed why he is aligned with the ‘Sassy Southern Belle’ during a recent edition of RAW Talk. He told Charly Caruso the following. Lacey reacted to a creepy fan mailing her lingerie not too long ago.

“I’m regaining my self respect. Charly, long before you were born, The Nature Boy was the reason some people think that the business as you know it is where it’s at today. It all started long ago with a guy named The Nature Boy, okay? You see this right here? I got two of them. I’m going to have three when Orton retires. I’ll have four because I’m going to go in the Hall of Fame as not only the greatest wrestler of all time, which I already am… There’s a Hall of Fame worth of knowledge right here (in my head). And if the great one, who I’m so tired of hearing people tell me is better than me… maybe she is, but I’m going to do something that I’ve never done. So, the great one was trained by Hunter in NXT, right? Well, who do you think Hunter grew up loving? Who do you think Shawn grew up loving?

“So I’m going to take all this, and all this positivity, I’m going to quit being humble, I’m going to tell the dressing room like it is, and I’m going to train her to be a world champion. And being a world champion in this company is gold. You have it your whole life. It’s not like this Rolex watch, I have 30 of those. This (Hall of Fame ring) is what you want, that (title) is what you want. The only way to get there is through hard work. She’s been a Marine. She’s not afraid of the work, not afraid of the time. We’re going for the gold. Sorry to be like this but I haven’t been… Serving notice to the dressing room. … (Charlotte) has 13 world titles. We’re going to get one, we’re going to start with one. And maybe a Royal Rumble. We’re going to start right now. Serving notice.” Lacey Evans ripped off this WWE Hall of Famer on another recent edition of Raw.